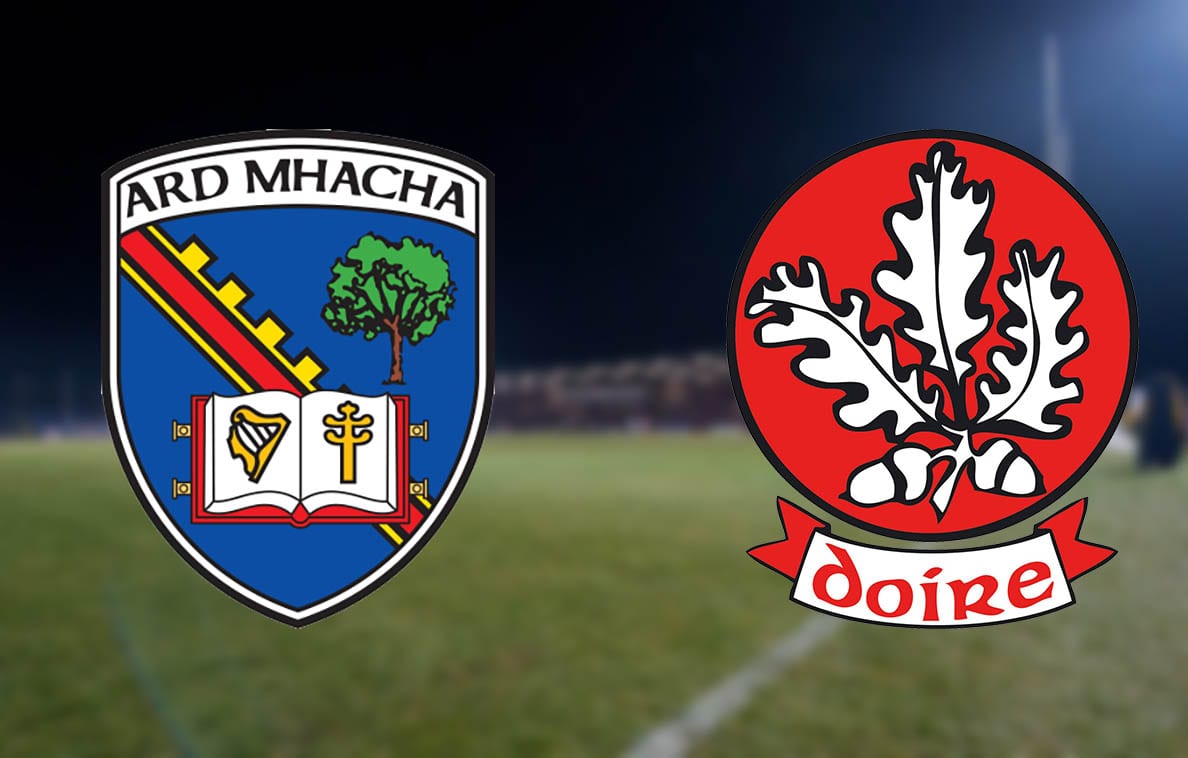 Armagh cruised to a fifth consecutive win in the National League with a four-point victory over Derry at the Athletic Grounds on Saturday evening.

With Fermanagh not in action until tomorrow, both sides could meet next Sunday in a top of the table clash and a possible prelude to a Croke Park final later in the month.

Armagh started the brighter of the two sides tonight with Niall Grimley opening the scoring on four minutes before Conor McAtamney responded with a speculative effort on eight.

Andrew Murnin then added his first of the game with a nicely-executed point sixty seconds later.

The game, being played under the hue of the Athletic Grounds floodlights, needed a bit of life sparked into it – and the crowd – and the big St Paul’s man duly obliged. He was the quickest to react when Gregory McCabe’s pointed effort rebounded off the post; Murnin seized the opportunity, picking up the lose ball and blasting in past the Derry ‘keeper on 17 minutes.

However, that comfortable four-point cushion was short-lived as the visitors chipped away and eventually took the lead thanks to unanswered scores from Mark Lynch, James Kielt, McAtamney and two from the boot of Emmett Bradley.

Colm Watters was able to stem the flow and equalise with a deftly-taken point; a feint of the right before cooly placing over the bar with his left for one of the game’s standout scores.

There were a flurry of scores towards the end of a relatively quiet half. Kielt responded quickly to that Watters’ effort and one more for the Oak Leaf county gave them a two point lead for the first time in the game.

Rory Grugan slotted a free over four minutes into injury time to reduce the arrears to just the single score at the break.

With the wind at the backs, it didn’t take too long for the home side to get into their stride following the interval and it was the impressive Murnin who kick-started a comfortable half. His point was followed up by an Aidan Forker effort to give Armagh the advantage once again.

Mark Lynch fisted over from yards out to draw level again but Rory Grugan had his first of two glorious goal chances on 43 minutes – one-on-one with the advancing ‘keeper, the Ballymacnab man saw his shot fly past the outside of the post.

But true to form, the captain responded with a well-taken point to give his side the lead. Emmett Bradley equalised once more but that was as good as it was going to get for the visitors as Armagh took control of the contest from this point on.

Niall Rowland, Murnin, Grugan and Stephen Sheridan all slotted over scores before Derry were able to respond.

A couple of Mark Lynch frees were scattered in between Grugan efforts for Armagh in a timid final 20 minutes from a depleted Derry side.

And the crowning moment of the game came as the clock ticked into stoppage time. A mazy Patrick Burns run and lay-off to the on-rushing Charlie Vernon looked like a certain goal but the big ‘Harps man was scythed down in the box.

The referee had little option but to spread his arms and indicate a penalty. Grugan, with four points between the teams, had the luxury of going for goal with no prospect of a Derryreprisal but his effort sailed over the bar.

Derry added a consolation point with the last kick of the game but it’s Armagh who sit perched at the top of the pile while their northern rivals look nervously over their shoulder towards the bottom three.

Next up for Armagh is a trip to Brewster Park against Fermanagh in another Ulster derby next Sunday, March 18.