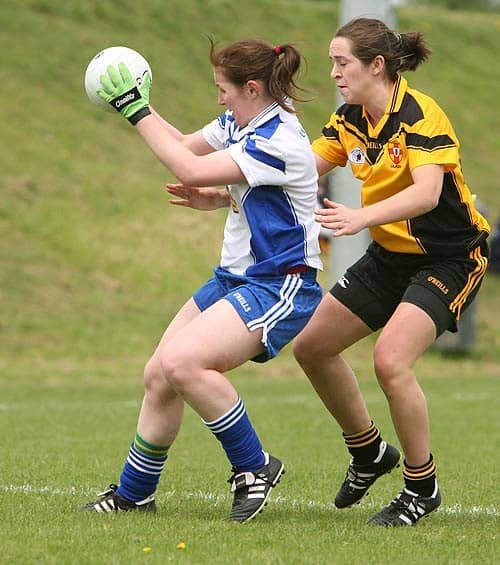 ORCHARD captain Caroline O’Hanlon will trade her orange jersey for a yellow one today (Saturday) as she spearheads Ulster’s defence of their interpro title in Kinnegad.

A year ago, the revered Armagh midfielder (pictured in her Ulster colours) was named overall Player of the Tournament after inspiring the northern province to an impressive trophy triumph.

Ulster beat their three rivals in the round robin stage and then in the final inflicted a second defeat of the day on a Munster team packed with representatives of All Ireland champions, Cork.

Even by O’Hanlon’s high standards, it was a particularly impressive performance to outshine all the top players in the country having only been playing in Division Three of the National League.

Many of her team-mates and opponents in the final had featured in the first division decider between eventual victors Monaghan and Cork so Carrickcruppen’s O’Hanlon should have been at a disadvantage.

But what made the Bessbrook woman’s dominant displays even more remarkable was the fact that the previous weekend she had inspired Northern Ireland to silver medals at the European Netball Championships.

Her Player of the Match display on the Sunday secured a narrow win over Wales and runners-up spot for the girls in green for the first time ever so it was a great effort to recover in time to play four matches in a different sport six days later never mind excel.

McKenna, fresh from being named Armagh Sportswoman of the Year, is expected to start in the half forward line with the versatile Sinead McCleary – part of the winning squad along with O’Hanlon last year – slotting into at wing back in spite of playing full forward recently for her county.

The fifth Armagh representative in the squad is veteran defender Caoimhe Morgan, O’Hanlon’s fellow 2006 All Star, who has returned to inter-county football this season after giving birth to her first child in November.

“After the disappointment of losing our National League final against Down, the interpros will be a nice change of scene for the Armagh players selected,” says double All Star O’Hanlon.

“It’s always enjoyable to play with and against the best players in the country and it should be particularly competitive with the other provinces out to turn the tables on Ulster following our success last year.”