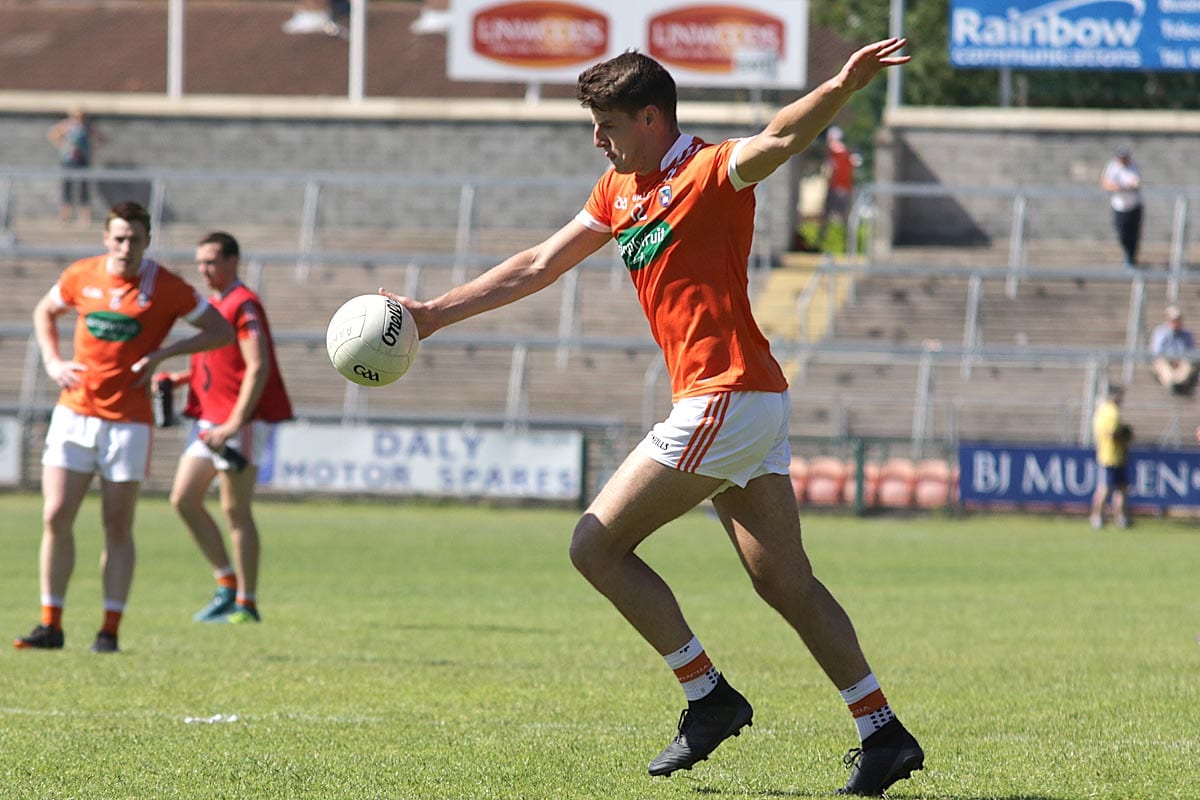 Armagh’s All-Ireland Championship run came to a halt as they lost to Roscommon in O’Moore Park, Portlaois on Saturday afternoon.

Kieran McGeeney’s men trailed by just a single point going into injury time, but unlike seven days ago, Armagh were on the end of a stoppage time rout as they lost the game by six points.

Rory Grugan missed a penalty midway through the second half, which preceded an easy 21-yard free – that could have put a completely differently complexion on today’s scoreline.

However, it’s Division Two and back to the Ulster Championship for Armagh in 2019 while Roscommon – beaten Connaught finalists – will hope to make an impact in this season’s Super 8s, which get up and running next weekend.

The game began in blistering fashion, with each side registering two points each within the opening five minutes – Aidan Forker with a fantastic looping effort from the right to open the Orchard’s account before Jemar Hall pulled the sides level for a second time.

Armagh then took the lead on seven minutes through the impressive Andrew Murnin, whose deft shuffle and a shimmy, allowed himself a yard of space to sweep over with his right boot.

Forkhill’s Stephen Sheridan extended the lead before Roscommon’s Kieran Murtagh added his first from a free on 10 minutes – it wouldn’t be his last.

Murnin extended the two point advantage once more a minute later but the sides were level once more, in what was a high octane opening 15 minutes of attacking football.

Captain Rory Grugan got his first of the game with a characteristic cool finish before Murnin snatched the ball from the sky as he raced back, tapping over for an easy finish. Grugan extended Armagh’s lead to three with a free on 20 minutes.

Another Grugan score came moments later but a few minutes of excellent play from the talented Enda Smith turned this game on its head.

The Rossies’ corner forward finished off a splendid attack by rifling past the helpless Blaine Hughes who had little chance in the Armagh goal.

Despite a super long-distance effort from Murnin levelling things up within seconds of that goal, Roscommon asserted their dominance as the half drew to a close.

Three points on the trot – one from Smith who walked his way in to fist the easiest of points the pick of the bunch – to leave the Ulstermen hanging on.

A Grugan free in stoppage time reduced the deficit to two points to end what was a simply stunning 35 minutes of attacking, open and ultimately entertaining football in Portlaois.

And it was Grugan who started the second half scoring with a point within a minute – perhaps a goal was on for the Ballymacnab man.

However, Roscommon tapped over three unanswered scores before Grugan’s goal-bound effort was blocked by a Roscommon foot. The referee didn’t hesitate pointing to the spot. Up stepped the Armagh captain but the Rossies’ goalkeeper was equal to the effort, diving low to his right to thwart a frustrated Grugan.

Enda Smith added salt to the wound with an immediate point soon after.

Nonetheless, Armagh plugged away and in Mark Shields, they found an unlikely goalscorer; winning a long ball in, before swivelling and rattling the net. Three points in it on 48 minutes.

Roscommon added another two before Grimley notched over a free on 55. Diarmuid Murtagh continued his fine scoring form with a Roscommon score but three unanswered scores from Armagh – Grimley (2) and McParland – putting just a single score between the sides with three minutes of normal time remaining.

Another Grimley free on 70 minutes cancelled out a fine Roscommon score to leave this game on a knife-edge going into the final moments of the match.

But it was as good as it got for Armagh who conceded 1-3 – including a second Enda Smith goal – in the six allotted minutes of stoppage time.

Ryan McShane added a late consolation but Armagh’s summer came to an end in Portlaois – a six point defeat, an injustice on what was a valiant performance in the soaring heat.

Check out the full-time highlights between Armagh and Roscommon! pic.twitter.com/dHsOuesKQr