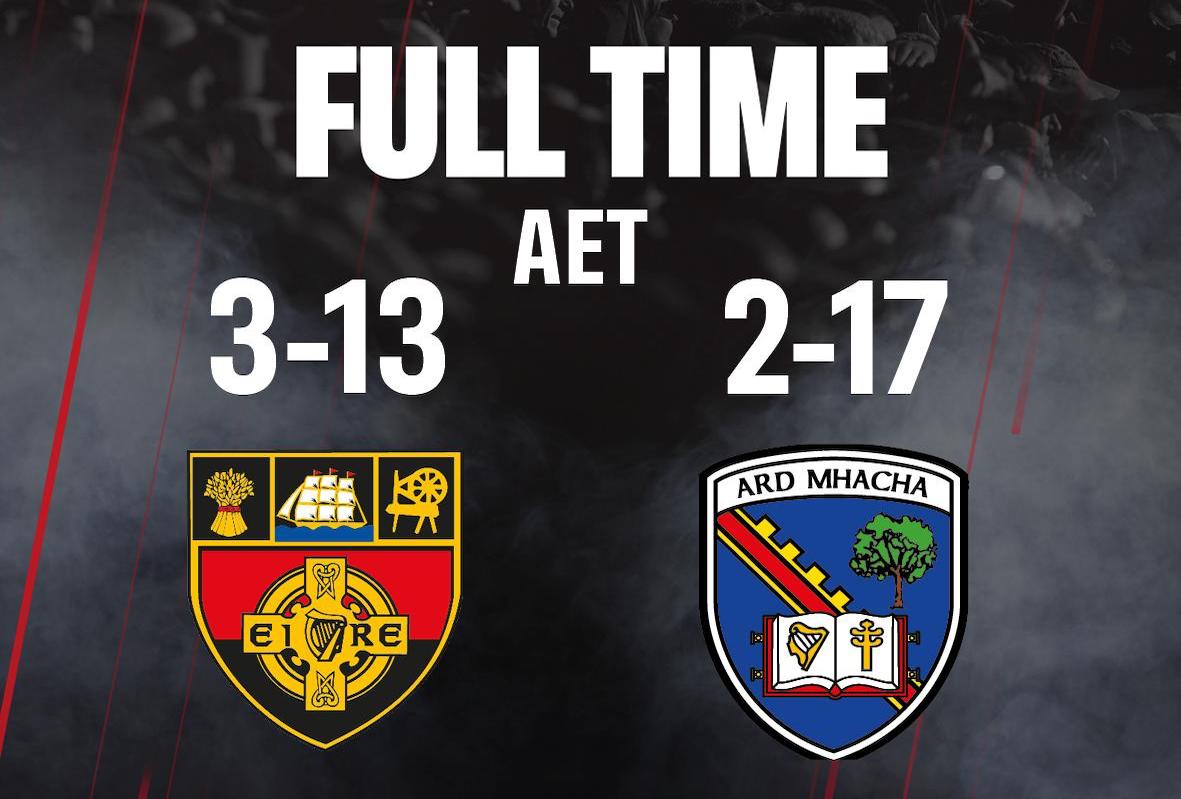 Armagh’s wretched form in the first round of the Ulster Championship came to an end after a dramatic one point win over 14-man Down in Newry on Sunday afternoon.

Forget the invisible boundary splitting these two counties in Pairc Esler; the margin was even tighter in this high-octane Ulster contest – one which will give the purist ammunition to retain the provincial titles.

Defeat would have been galling for Kieran McGeeney given his side had a man advantage for more than fifty minutes of playing time after Caolan Mooney’s first half red card.

Questions mark would have been raised – and still may be – had Armagh came away with a ticket through the qualifiers, especially after surrendering a five point lead with three minutes of normal time to go.

Armagh started brightly but trailed at the break despite the inspired form of the hugely exciting Rian O’Neill, who notched the first of four first half points, after just a few minutes of play.

His Crossmaglen clubmates Jamie Clarke (2) and James Morgan were the only two to register scores in the first 35′ but the story of the half belonged to Down’s Pat Havern, who nipped in for a goal on 23 minutes, and Caolan Mooney whose high tackle saw his team reduced to 14 in first-half stoppage time.

It was a red card that looked to have made the difference as Armagh began to assert control of the second half.

Mark Shields rattled the net midway through the second half before Stefan Campbell put fibve between the sides but just as Armagh could feel their first Ulster Championship win, back came the old enemy.

A Donal O’Hare goal reduced arrears to just two points before the deficit was wiped out.

And it was the hosts – minus a man – who began extra-time with a flurry of scores. Three points went unanswered before Kennedy doubled his personal tally before the extra-time interval.

Campbell kicked a point for the visitors almost from the restart before Andrew Murnin levelled the tie once more immediately afterwards.

Then came what appeared to be the decisive moment in deciding this contest when Murnin struck gold, raising the green flag to see Armagh three ahead once more.

Rian O’Neill added his eighth point of the afternoon to seemingly seal the victory for the Orchard men but Down still had their own semi-final ambitions with a third goal with a minute still to play.

However, it wasn’t to be as Armagh managed to scrape over the line. They will face Cavan in the semi-final.