Armagh ‘Down’ in the dumps after injury-time goal seals fate 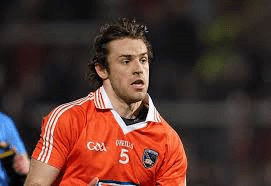 Armagh played with the wind in their favour in the first half and enjoyed a 1-3 to 0-3 lead at the interval thanks to a Kevin Dyas goal after 27 minutes.

Poland’s first goal drew the sides level but Tony Kernan found the net to make it 2-4 to 1-6 to Armagh.

Robbie Tasker was sent-off for an off-the-ball incident soon after.

Both sides went into the first ever Football League fixture to be played on a Friday night with one point from their opening fixture.

Down drew with Ulster rivals Monaghan last week while Armagh recovered from a heavy deficit to secure a draw at Louth.

A healthy crowd braved the wet and windy conditions at the Athletic Grounds, but they witnessed a largely scrappy game in the first half.

The home side got the scoring underway courtesy of a point from Ciaran Rafferty and a Tony Kernan free, but Down replied with a Donal O’Hare score.

Jamie Clarke extended his side’s advantage on 23 minutes and Stefan Campbell provided the assist for Dyas (pictured) to score the first goal of the game.

A Kevin McKernan point and an O’Hare free in added time reduced the Mournemen’s deficit to three points at the break.

James McCartan’s side began the second half strongly with Poland helping himself to a goal and a point, although Tasker brought the sides level again.

McKernan and Niall Madine pointed for Down, but Kernan’s goal put the visitors in the ascendancy.

For Down, it was their first league win over Armagh at the Athletic Grounds since 1985.