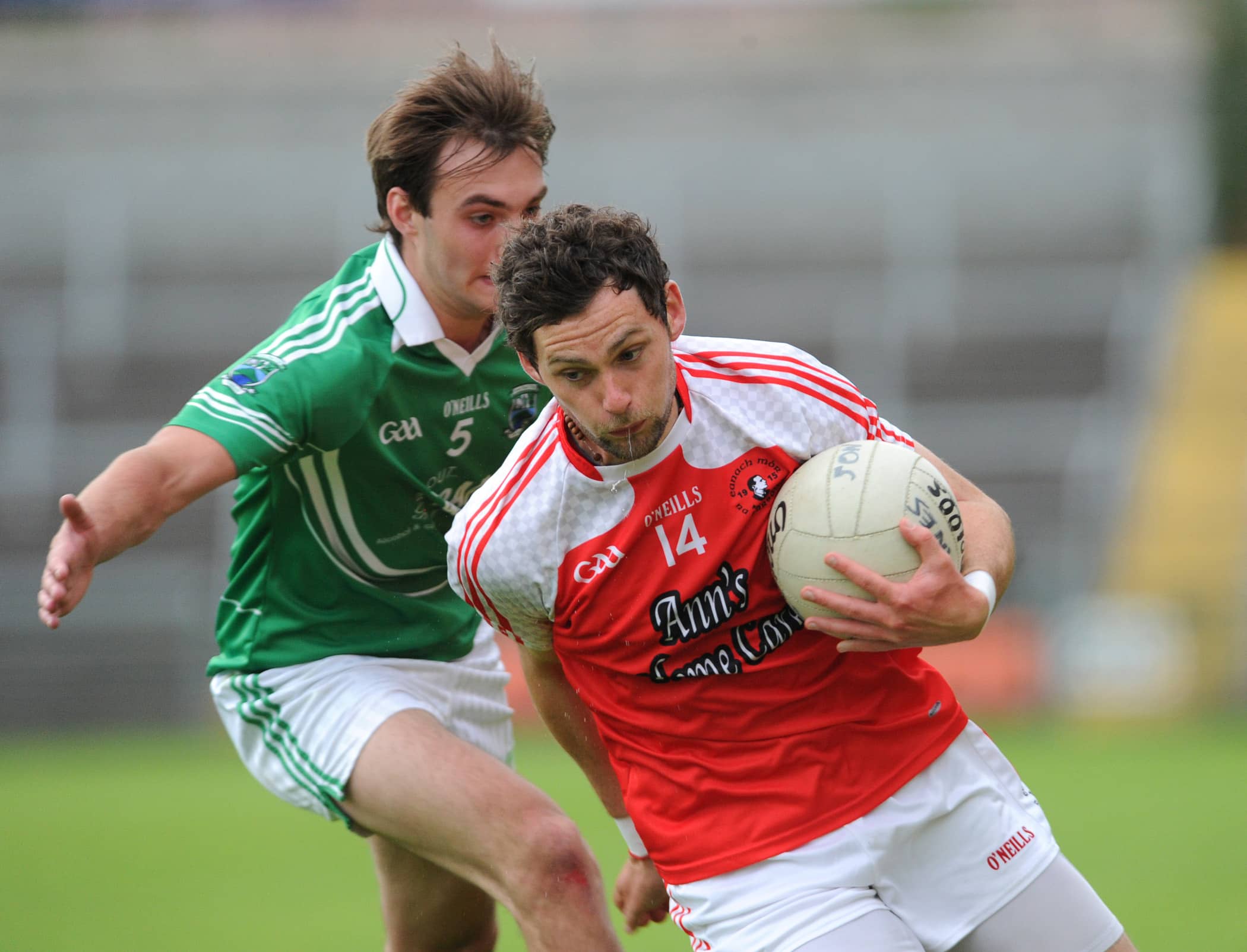 Annaghmore were lead by an inspirational performance from county panellist Oisin Mac Iomhair as they grabbed a big win over Shane O’Neill’s in the first round of the Senior Championship.

Shane O’Neill’s made a promising start as they took a five point lead in the opening four minutes, but Annaghmore edged their way back into the game and lead by three at half time thanks to two goals from Connor Cullen. Annaghmore took over in the second half and restricted the Camlough side to one single point in the final 30 minutes.

Two left footed scores from Paul O’Rourke and a goal from corner forward Mark McCabe gave Shane O’Neill’s a massive early advantage, and led many to believe that there was a massive upset on the cards.

Annaghmore didn’t let Shane O’Neill’s strong start knock them back and they grabbed a goal minutes later when Oisin Mac Iomhair kicked a dangerous ball into the middle from the right hand side, and it was met by the fist of Connor Cullen, this reduced the deficit to two.

Oisin Mac Iomhair grabbed two points minutes later, and Annaghmore almost took the lead when the ball fell to Shane Smith just yards from the Shane O’Neill’s goal, but the former county player could only knock the ball over the bar as he was closed down instantly by O’Neill’s goalkeeper Connor McKeown.

The Camlough side were still leading by two points 25 minutes into the game, two points from the impressive Paul O’Rourke, which took his tally in the game to five helped them hold their lead.

The game instantly turned just before the half time whistle, Annaghmore grabbed a replica goal to the first as Cullen met Mac Iomhair’s ball across from the right and fisted it into the Shane O’Neill’s net. This was followed up by two points from Oisin Mac Iomhair, the first of those was a stunning score from the right hand side.

The Annaghmore full forward started the second half just like he finished the first, with two early points. Connor Cullen also got a close range point which left the score at 2-10 to 1-07 in Annaghmore’s favour after 40 minutes.

Annaghmore done a great job at holding Paul O’Rourke out of the game, they adjusted their tactics to deal with the O’Neill’s corner forward after being rattled by his dangers early on. The Shane O’Neill’s forward looked to be getting frustrated by his lack of action in the game, and this was quite obvious when he missed a fairly achievable free kick on the 47th minute.

Unsurprisingly Mac Iomhair scored what was probably the best point of the game, he picked the ball up on the right hand side in his own half and went on a storming run down wing before cutting in and lashing the ball over with his left foot from 30 yards. This score gave Annaghmore a seven point advantage with ten minutes to go.

Annaghmore didn’t take any massive risks in the closing stages of the game as they sat back with the intentions of holding their lead.

Although they managed to catch Shane O’Neill’s on the break, as O’Neill’s had pushed numbers forward in a desperate effort for a comeback. A ball from over the top from Ciaran Mac Iomhair was met by Michael McNeice and the Annaghmore man cheekily chipped the ball over the head of Connor McKeown after the Shane O’Neill’s keeper had rushed off his line.

Paul O’Rourke scored Shane O’Neill’s only point of the second half in injury time with a close range free kick. The game finished 3-12 to 1-08 in what was a morale boosting victory for Annaghmore.