Italy will face England in the first game in Lurgan 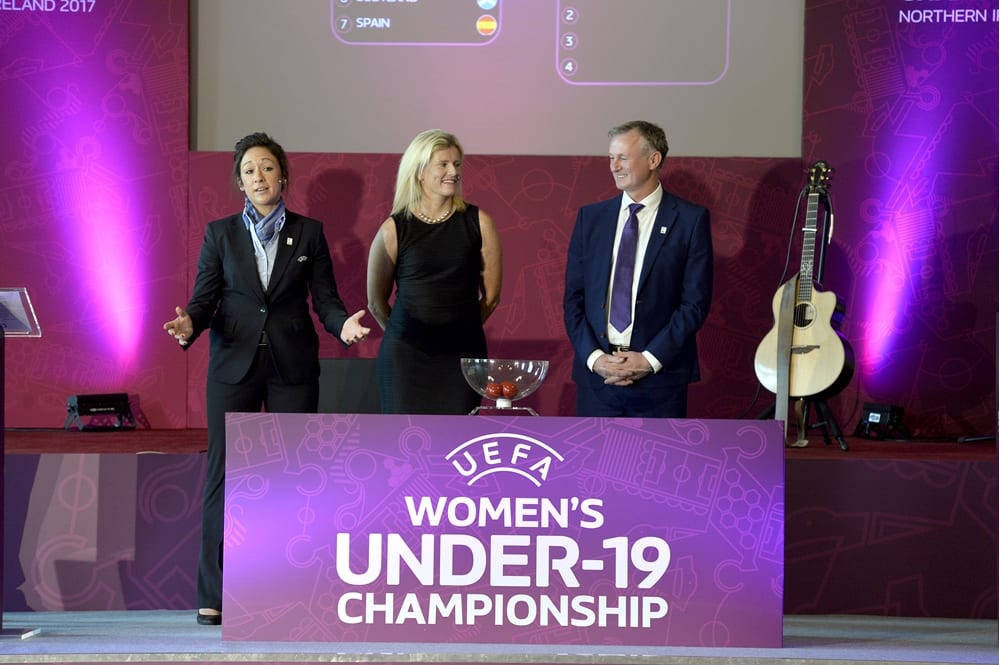 The Irish Football Association and Armagh City, Banbridge and Craigavon Borough Council are delighted to announce that five of the twelve matches in UEFA Women’s Under 19 Championship group stages will be played in the borough!

The draw for the finals, which are being staged in Northern Ireland from 8-20 August, took place in Belfast City Hall on Thursday.

Northern Ireland will face Spain, Germany and Scotland in the group stages of this summer’s UEFA Women’s Under-19 Championship. The other group will see holders France, England, Italy and the Netherlands face each other.

Northern Ireland’s first game of the tournament will see them take on Spain, last year’s runners-up, at the National Football Stadium at Windsor Park on 8 August (7pm kick-off).

Their second Group A game will be held at Mourneview Park in Lurgan on 11 August (7pm) where they will face Scotland. The third and final group game will be against Germany at Ballymena Showgrounds on 14 August (7pm).

“It is fantastic that two of the four venues selected to host group stages for this prestigious tournament are located within our borough. We can look forward to a superb display of quality football from some of the best teams in Europe including Northern Ireland’s second group game” said Vice-Chair of the Leisure and Community Services Committee, Alderman Paul Rankin who attended the draw.

The first match to be held in the borough will be in Mourneview Park at 3pm on 8 August where Italy will face England. Germany will take on Spain in Shamrock Park at 3pm on 11 August.

The final two matches will be held on 14 August with Netherlands taking on Italy in Shamrock Park at 3pm and Spain facing Scotland in Mourneview Park at 7pm.

The winners and runners-up in both groups will face each other in the semi-finals at the National Football Stadium at Windsor Park.

After the draw, National Women’s Coach Alfie Wylie said: “It’s fantastic and very exciting. We can look forward to three wonderful games. Taking on Spain, who were finalists last year, in the first game will be a great occasion. They are a superb team from a top footballing country.

“The senior teams of all three nations are taking part in the Women’s Euros this summer. This is a fantastic opportunity for our girls to test themselves against some of the best teams in Europe.”

Tickets for all matches are now on sale via the Ticketmaster website.