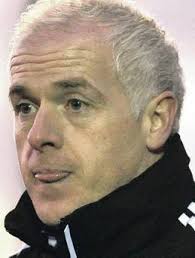 Armagh City will face their toughest test of the new season on Saturday when they tackle current Belfast Telegraph Championship One leaders Harland and Wolff Welders.

The Belfast visitors have won three and drawn one of their opening four league matches and, by all accounts, will be tough nuts to crack.

City, on the other hand, struggled early in the season with defeats at Dergview and at home to the PSNI but, in successive weekends, have claimed a championship win away at Lisburn Distillery and travelled to knock Dollingstown out of the Bob Radcliffe Cup.

The Holm Park outfit, however, have recently been strengthened with the return of key squad players, with defender/midfielder Paul Carvill and striker Gavin McFarland both now fighting for first-team places.

Several other players who missed early season games are now back and, with playing-time under their belts, Armagh will be a much tougher proposition from now on.

Certainly, they will need to be at their fighting best this Saturday when the high-flying Harland and Wolff Welders come calling!

A reverse of that result would be ideal and is certainly not out of the question.

City are now strong in every department but have still not produced the flowing form which saw them swoop to claim the Championship Two title in such fine style last season.

But, if they can produce their best this weekend, then another three league points is well within the squad’s grasp!