City optimistic but not over-confident of Championship One task 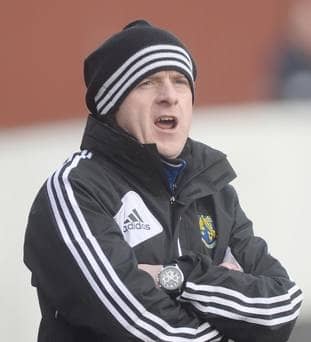 Armagh City Football Club is optimistic for the season ahead in the Belfast Telegraph Championship One.

But the team will certainly not be over-confident, knowing they will have to scrap for every point in this competitive league.

This was the conclusion of both the club’s management and senior committee at their annual general meeting held in the Holm Park clubrooms on Thurday night last.

Reflecting on winning Championship Two last season, chairman Philip Johnston stated, “It was superb, both on and off the pitch”.

“This was due to a great deal of hard work by everyone associated with the club. More of the same is required this year if we are to have an even bigger and better season this time around,” he added.

The chairman went on, “We want to continue to showcase Armagh City in its best light and, hopefully, everyone can look forward with confidence”.

Philip also praised the coaches of the Youth Section for all their efforts in bringing players through the club’s ranks.

“Our young teams managed to win 11 trophies out of a possible 18 last season and that must be highly commended,” he emphasised.
These sentiments were echoed by senior team manager Marty Rice (pictured).
But he warned, “This is a massive step-up, we are not going to get one easy game!”
There were one or two crucial changes to the senior committee line-up at the AGM.
Not least was the appointment new members – Rowland (Roly) McCabe and Nigel Cook. Both have long associations with the Holm Park club, with
Nigel being a former chairman and ace fundraiser who has returned after an absence of several years. Roly is an ex-player with Milford Everton, the fore-runner to Armagh FC, and will take over maintenance.
Vice-chairman Aiden Murphy stepped down from his role at the meeting because of increased commitments but will remain a leading light and active member of the committee.
And it was decided to appoint two new vice-chairmen in his place! – John Hynds, fixtures secretary, and current bar co-ordinator Keith Nesbitt.
The crucial work of treasurer will be retained by Geoff Lester, while Stephen Richardson will again act as committee secretary, with responsibility for the media.
The hard-working committee also retains a number of long-term stalwarts, including Bertie Hutchinson, Noel Humphries, Norman Wray, Spencer Hutchinson, Gary Cooke, Eric Brown, Paul Hayes and Robert Patterson.
Immediately after the AGM, the August monthly meeting was held.
It was revealed that the number one priority was to upgrade shower facilities at Holm Park and it was agreed that improvement work on this will take place straightaway, under the co-ordination of Roly McCabe.
Admission charges for the forthcoming season were agreed at £6 and £4 concession.Full membership is £65, season ticket holders at £65 and £40 concession, while house members can avail of all the club’s facilities for just £15 per annum. Golden Eagle club membership is again £120. All new members welcome. Enquiries in the clubrooms or to any of the above mentioned officials or committee members.
Finally, it was agreed to open the Holm Park facilities on Black Saturday, August 30, when visitors will be welcomed from 11am onwards.