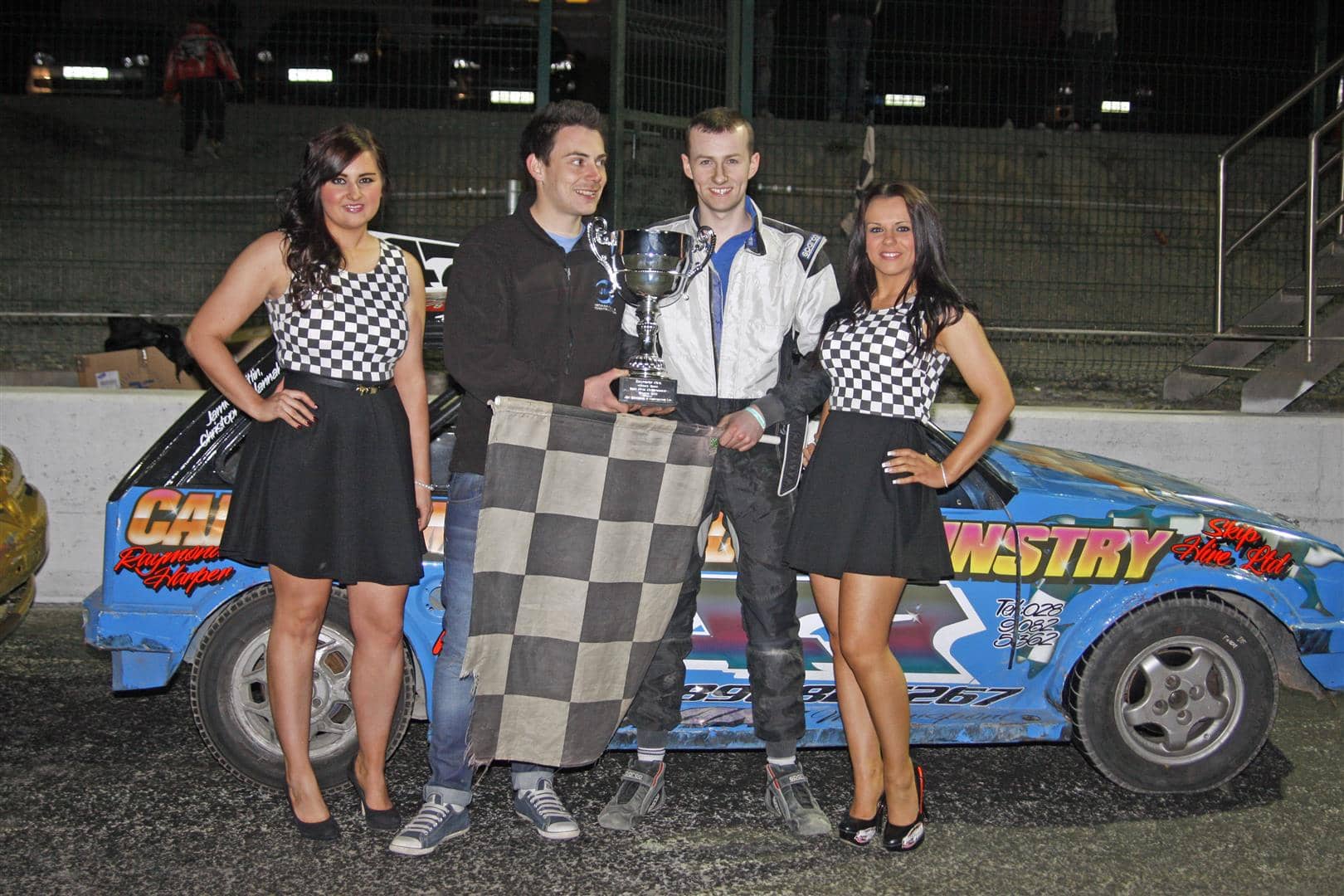 The Stock Rods are arguably Ulster’s most competitive formula at present, with little to choose between all the top local competitors. Add in World Champion Chris Lattka, Derek Conner and John McAllister from Scotland and the going was always going to be fraught! The opening qualifier fell to Ballymena’s Victor McAfee after Stephen McCready was demoted from the win for contact on Colin McNeice. Jonny Cardwell inherited what would turn out to be an important runner up spot. Micky McFall led them home in the reverse grid second heat, ahead of Lattka and Ben McCully, whilst McAfee hit engine problems late on which cost him a certain pole position for the final.
Cardwell annexed pole for the Irish Open final, and simply drew clear of the field as they treated the fans to a monstrous battle for second spot. McCready was fending off allcomers, and whilst Cardwell romped to a fine first ever major title by a huge margin, Lattka nicked second right at the line over McCready.

The 2L National Bangers were perhaps down in numbers, but they certainly weren’t down in action! A huge rollover during the main event signalled their intentions, before Irish Champion Steven Reynolds took the 2014 Spring Classic ahead of a great run from Dwayne Lynch with Stevo McGrath in third. Marty McKiernan then took the Allcomers amid the carnage, before an absolutely epic DD was shared by Reynolds and Keith Carey after a small fire brought things to a premature end.

The 2.0 Hot Rods produced three fantastic races, with a very pleasing 25 car field on hand, which included debuts for Conor Mulholland and former Lightning Rod star Richard Stewart. Thomas Dilly made good use of his current yellow grading to take the honours in the opening race of the night over Sean Dynes and Gareth Thompson, as the star men all struggled to get through from the rear. Another yellow grader, former F2 man Jack Boal, took his first win in the formula in heat two, chased home by the evergreen Davy Potter and Dilly.
Dynes quickly hit the front in the final, as the rest gathered up behind Potter for second. Adam Heatrick gave it his all on the outside for what must have seemed like a lifetime without making it stick, as the huge crowd were enthralled by the raging battle. Potter and Wayne Woolsey then controversially clashed in the closing stages, opening the door for World Champion Shane Murray and National Champion Adam Hylands to grab second and third at the chequers. There was no doubting the winner though, as Dynes was well down the road for a pleasing and most welcome victory.

There was never going to be any shortage of action from a field of 28 ProStocks,which included welcome Scottish visitor Jazz Moore. That was quickly underlined by a huge back straight rollover for Ashley Hawe during the opening laps of heat one. The Birches based Haugh brothers quickly stamped their authority on proceedings at the resumption, with Steven leading home Alan to the flag, and Stuart Agnew the third placed finisher. Conor McElmeel was the man on a charge in heat two, the Armagh man taking victory over Nikki McClelland and World Cup Champion Ryan Abernethy. Abernethy had been involved in a race long battle with British and European Champion Moore, which saw blows exchanged corner after corner between the two.
In the final it was all about novice grader Jason Kee, who held on to record an excellent win despite late race pressure from Mark Kinghan. Kinghan unfortunately ran into trouble on the last lap, opening the door for Alan Haugh and Abernethy to fill out the top three after another great night’s entertainment from the ProStocks.

The 1300 Stock Cars made their debut appearance at Tullyroan Oval, with a very encouraging 12 cars on the grid. Alan Brown made no mistake in the opening race, heading home Aaron Clarke and Michael Logan at the flag. The bumpers were being put to good use throughout the field, and former Stock Rod champion Raymond Harper stormed through to take the win in heat two over Brown and Calvin Blake. In the final Harper was again on a mission, arriving on race leader Brown’s rear bumper as the laps dwindled down. In good old stock car fashion, Raymond waited until the final corner to land the telling blow and nip through to victory. Brown and Blake again filled out the places. With a number of other drivers soon to get onto the track, this could well turn into a great class in the months to come.

There is no racing this weekend at Tullyroan Oval due to the European Championships in Scotland, which will see a host of local chase glory. Racing returns to the local venue on Saturday April 3rd, when the National Hot Rods top the bill in their latest World Championship Qualifier. Also on the bill are Superstox, Stock Rods and Junior Productions.