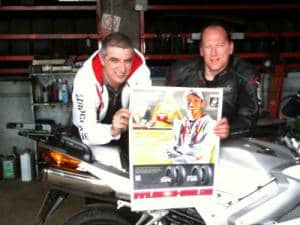 The 46 year-old will fly out to the Netherlands for the Assen round of the MotoGP championship, where he will receive VIP passes, accommodation and a private meet and greet with the Italian legend.

David, of Ballyleny Road, Richhill, entered the Bridgestone competition when he popped into his local tyre fitter, GM Tyres, recently. After purchasing a set of Battlax Sport Touring T30 tyres, he was automatically entered into the Mission Rossi giveaway.

He said: “I am still pinching myself. I have never won anything in my life. When I heard I had won the prize to meet Valentino Rossi I was in total shock.”

It is not the first time he will rub shoulders with a talented biker; his brother-in-law is well known Irish road racer Alex Donaldson.

David added: “I got into biking when I got married 21 years ago. Watching Alex ride gave me the bug and I have been riding ever since. But never in my wildest dreams did I think I’d be meeting Valentino Rossi as a result of being a biker. It is an incredible thought and can’t wait for Assen now.”

David visited GM Tyres to get his Honda VFR800 fitted with new tyres ahead of a biking weekend in the Isle of Skye.

“Philip said the T30s were better in the wet as well as the dry, so I decided to get them fitted,” said David. “I was also told I could win a prize to meet Rossi, but I didn’t think I’d have a chance!”