Donnelly forced to give up Lurgan bid 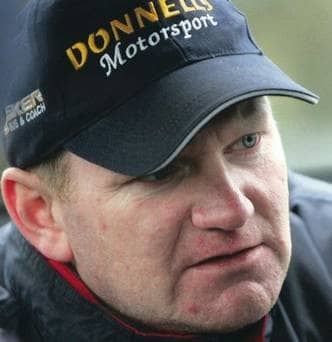 Eugene Donnelly has been forced to pull out of tomorrow’s Orchard Motorsport Lurgan Park Rally following the sudden death of a close family friend.

The record-equalling five times Irish Tarmac champion had been one of the favourites and, indeed, had come up with a cunning “if you can’t beat them join them” plan to end his run of near misses in the park.

Donnelly had linked up with the Banbridge team of 11-times park winner Kenny McKinstry and to ensure he gave himself the best possible shot at victory he had bagged what he calls “Kenny’s best car” – the S14 Subaru which has a string of wins behind it this year including the Donegal International.

But, understandably, Donnelly has had to pull out after the mother of his partner, Eileen, passed away unexpectedly.

It means, however, that McKinstry will now switch to the all-conquering S14 Impreza which is expected to appear still decked out in the decals of Donnelly’s sponsors, Lakeland Tyres and Yokohama.

The circumstances are unfortunate but Donnelly’s absence removes one of the hurdles in the way of McKinstry’s bid to round out his amazing Lurgan Park record to the perfect dozen.

There are several others, of course, still standing in his way including current Tarmac championship leader Garry Jennings in his S12 Subaru and five-times Circuit of Ireland winner Derek McGarrity in his M-Sport Ford Focus.

Add in the WRC Minis of Derek McGeehan, who drives the car in which Kris Meeke won last year, and Alan Carmichael as well as the Biggerstaffs, Denis and Stuart, both former Northern Ireland champions, and the battle for top honours in the North Armagh Club showcase event looks as tight as ever.

Adding to the spectacle is a display by the iconic Group B cars of the Slowly Sideways enthusiasts including a Lancia Stratos, a Peugeot 205 T16 and S2Audi Quattro.

It kicks off with the first of eight stages all contained within the confines of the scenic town park at 10.30am.