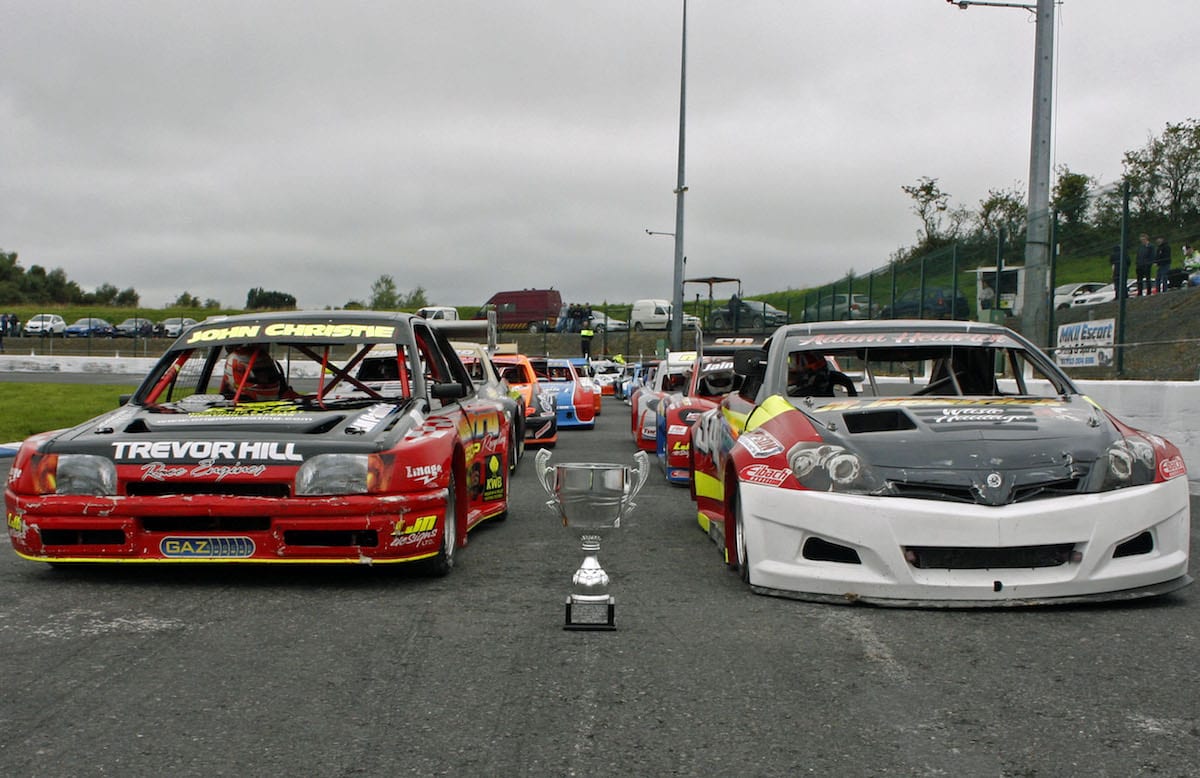 Best of British For Christie at Tullyroan!

The other major championship victory of the weekend fell to England’s Jordan Aylward, who was crowned Superstox European Champion, whilst Scotland’s Kenny Purdie claimed victory in the Classic Hot Rods Irish Open Championship.

A cosmopolitan entry from all corners of the British Isles contested the Dilly Roofing Supplies National Hot Rods British Championship, and it was John Christie who drew first blood with a decisive victory in the opening heat from pole position.

World and National Champion Chris Haird took second ahead of Adam Heatrick in third in a race blighted by incidents and penalties. Heat two saw English based Co Armagh native Bradley Dynes take the initial lead, but he was helpless to hold off a flying Robert McDonald, with the Scotsman pulling off a superb pass around the outside to take a sublime victory.

Christie and Heatrick shared the front row for the British Championship decider, with John soon settling ahead out front with Haird in tow.

Throughout the race Christie was equal to Haird’s advances, even withstanding a late charge from the World Champion when he pulled himself right alongside the lead car. Christie duly took the chequers to claim a faultless victory and his career Grand Slam of all the major titles.

A reversed grid British Revenge race saw an excellent win for Glenn Bell ahead of Derek Martin, before the same duo started the coveted Leslie Dallas Memorial Trophy race from the front of the grid.

Once again Bell was the class of the field, racing clear to take his third win in the event in the past four years, and also claim the spoils for the Ulster round of the Cele Services Four Nations Cup.

A huge field of 33 Superstox came under starters orders for their Mk2 Escort Shells & Spares sponsored European Championship with the field led away by local aces Gary Chambers and Gary Grattan.

At the green flag there was action galore all around the raceway, with Chambers being dispatched in some style where he was joined by World Champion Jason Cooper. Grattan took the lead ahead of Lincolnshire’s Jordan Aylward, but the English ace soon swooped ahead despite numerous caution periods as the action continued apace.

Aylward swept home to his first major championship triumph after a great drive, taking the flag with fist clenched in the air as he was crowned European Champion. British Champion Jordan Salmon took a fine second, with Brett Wesbroom completing an all English top three after a magnificent championship event.

Saturday’s Allcomers heat saw a huge rollover for Scotland’s Kenny McKenzie, with the win falling to another Scot, David Frame. Marc Spence led the meeting final for some way before Wesbroom powered past to take a resounding success over Nick Roots and Cooper.

Sunday’s Superstox action was for the Irish Open Championship, and it was World Champion Cooper who stole a march on the others in the opening heat as a commanding drive saw him take victory over Frame.

Heat two saw the only home win of the weekend in the Superstox, with Portadown’s Lee Davison racing home ahead of Roots and Wesbroom.

The Irish Open Final was full of action too, just like the rest of the weekend, and it was Wesbroom, who is becoming something of a track specialist at Tullyroan, who took a decisive victory after a great drive. Cooper, Nick Roots and Scottish Champ Bryan Forrest filled the places.

The Classic Hot Rods feature event was the Irish Open Championship, which offered the fans a great mix of nostalgia and fine racing. Norfolk ace Gary Goodswen’s immaculate Mk2 Escort took the honours in the opener ahead of Graham Boyd’s Austin A40 and Gary O’Neill’s Anglia. Heat two saw a popular win for Scotland’s Kenny Purdie ahead of Sussex based veteran Hughie Weaver and local ace Clive Richardson.

Purdie quickly established a lead in the Mk2 Escort Shells & Spares sponsored Irish Open Final, with Richardson giving chase once he had worked his way through to second.

Purdie’s lead looked unassailable but Richardson was right on the ragged edge as he battled hard to reduce the deficit. He arrived on Purdie’s tail as the laps dwindled away, with Kenny hanging on for a fine win over Richardson and Goodswen.

The two heat winners on Sunday were Boyd and Purdie, the latter after a great around the outside blast. Circumstances meant the Tullyroan Challenge Cup final was not run, with the top three trophies being awarded to Purdie, Boyd and Ryan Polley as the top three aggregate points scorers from the heats.

A full support programme kept the fans entertained over the two days, with Ben McCully the star in both Stock Rods heats as he grabbed a brace of wins. The final saw an excellent dice which finally fell the way of Irish Champion Derek McMillan, ahead of World Champion Marc Morrell and Victor McAfee.

The Junior Productions saw recent graduate to the formula Aaron Ward perform well, but the heat wins fell to Adam Weir and Sam McNeice before NI Points Champion Drew McKeown stamped his authority on the feature race to take the silverware.

Sunday’s Lightning Rods saw an excellent field of almost 20 cars on track, with Dermot Tynan underlining his excellent recent form with his first ever win in heat one.

Vince Litter grabbed the second heat win before a great charge through the field by European Champion Jordan Rochford saw him take the final win in some style. The ProStocks heats fell to Del McLaughlin and Robbie Wright, before the final saw possibly the closest finish of the season so far!

Dan Shannon went for a huge lunge into the final bend in a bid to dislodge leader Wright, and in a struggle to regain control they collided again on the exit as they ran to the flag. Shannon got spun to the wall and Wright to the grass, parting the ways for McLaughlin to charge through the middle to the most unlikely of victories by a matter of inches! Shannon took second as he crossed the line backwards, with Lee McCloy and a spinning Wright next up.

Racing continues at Tullyroan Oval this coming Saturday evening, September 9th, at 6.30pm with the Lee Cherry Memorial Trophy for the 2.0 Hot Rods the feature event. Also in action are the Stock Rods, 1300 Stock Cars, Thunder Rods and Ninja Karts.