Biggest race meeting ever staged at Tullyroan Oval this weekend 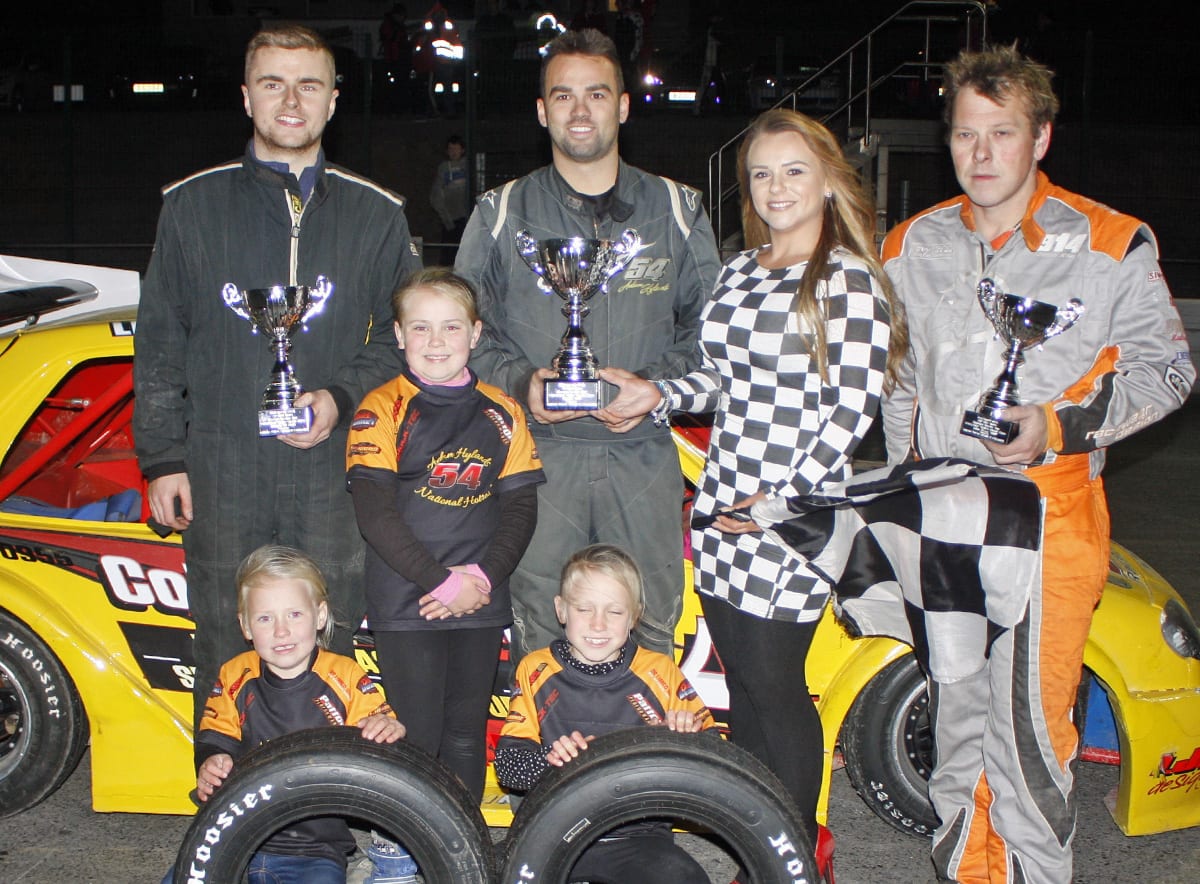 London’s Ian Beaumont was the big winner at Tullyroan Oval on Saturday evening as the World Championship was crowned 1300 Stock Cars Irish Open Champion after an action packed night’s racing.

Another World Champion in victory lane was Ballymoney’s Steven Bolton who won the Unlimited National Bangers Nutshaker title, whilst the 2.0 Hot Rods Hoosier Tyres Challenge Series fell to Portadown’s European Champion Adam Hylands. Other feature race wins at the meeting, sponsored by Greers Volvo and Ray McGrath Transport, were Dan Shannon from a huge field of Stock Rods, and another World Champion, Gordy McKee, in the Lightning Rods.

Visitors from England and Scotland joined the locals for the 1300 Stock Cars Irish Open Championship, and as expected there was action aplenty throughout the evening. England’s Ben White hit the front in the opening heat, before losing out to fellow countryman Curtis Tebbenham who went on to take the victory over Ryan Stewart. Jonny Patterson took a huge knock on the home straight during that one, whilst it was Tebbenham who was involved in a huge crash in heat two.

Local form man Robbie Wright stormed home in that one with his brother Davy and Stewart filling the places.
Stewart and Davy Wright occupied the front row for the Irish Open Final, with World Champion Ian Beaumont lining up ominously on row two alongside Scotland’s Andrew Mathieson. After the heavy opening exchanges it was Robbie Wright who hit the front before being turned aside by Beaumont who went ahead. Stewart and Mathieson were in close proximity but Beaumont just managed to edge clear to take a very polished victory indeed. Mathieson nipped past Stewart with one to go, but Ryan came back hard into the final bend to snatch back second spot with the Scotsman having to make do with third.

Adam Maxwell, World Champion Steven Bolton and local Points Champion Leonard Dunn disputed the early lead in the Unlimited National Bangers Nutshaker 2018 event, with a number of the others getting involved in some hard hitting action on the Tullyroan Bend. Bolton got the better of the others to take the win ahead of Dunn and Rodney Herron at the chequered flag. Maxwell then took the win in the Allcomers race despite Kieran McIvor’s best efforts to stop him, with Dunn and Bolton the placemen this time.

The Stephen Bannon Memorial Destruction Derby saw a huge wrecking train initiated by Jonny Murdock and Jake Neill. Willy Ogilby and the rest joined in too, with the last man in Dunn being declared the winner.

The 2.0 Hot Rods contested two more graded heats before the Grand Final of the Hoosier Racing Tires Challenge Series which has been running throughout the season. Brian Cherry led many of the opening laps of the first heat, before losing out to a flying Jason Devlin who was back in harness for the first time in a couple of months. Mark Madill and European Champion Adam Hylands chased him home. Allen Cherry raced to a clear win in the second heat ahead of Madill and British Champion Stuart Cochrane.

Aggregate points from across the series saw Hylands and Cochrane share the front row for the Hoosier Grand Final, with Hylands quickly edging out an advantage up front. Despite Cochrane’s best efforts, it was Hylands who took the series win with Stuart having to make do with second ahead of Allen Cherry. All three received new Hoosier tyres courtesy of the series sponsors.

A fantastic 28 car turn out of Stock Rods included welcome Scottish visitor Stewart Patterson and season debuts for Stephen McCready, Rick Purdy, Del McLaughlin, William Taggart and Colin McNiece. On the very packed raceway trouble hit early in heat one as Sam Wilson was spun by Ryan Murphy which earned the latter a disqualification. A number of cars collected the spinning Wilson, and amongst them was a very unlucky Purdy who collected damage as did Mick Rodgers and Jonny Gillespie. At the resumption Samuel Montgomery held off a spirited Lee Wylie to take the win with Dan Shannon in third. Evan Monaghan led heat two early on, and it turned out to be a cracking race.

Taggart went ahead with outside pass on Monaghan, only to hit trouble and retire. That handed the lead and the win to the returning Colin McNiece, who finished well clear of Montgomery and Monaghan as the star men had their work cut out on the busy circuit. It really was exceptional racing with 24 cars packed inside less than half a lap at one stage.

Johnny McCloy and then Del McLaughlin had turns out front in the final, before Shannon powered through to the lead. The current ProStocks British Champion is perhaps better than his current yellow grading in a Stock Rod suggests, and he simply pulled further and further clear out front.

McNiece drove a great race to second, with another great drive from star grader Shane McMillan netted him third ahead of Micky McFall and McCready. It was an excellent night of Stock Rod racing which bodes very well for the future, with the class really booming at present.

Before the opening Lightning Rods heat Portadown’s Jordan Rochford paraded the European Championship trophy which he had won the previous weekend at Hednesford in England. On a track made difficult by a brief shower, Rochford then drove a superb race to take the first win of the night having started last car on the grid. Irish Champion Nigel Jackson took second ahead of long time leader James McKinney. Recent newcomer McKinney underlined his potential with a great victory in heat two, leading all the way to take his first ever win ahead of Dylan and Adam McCann.

Ronan McNally led the way for over half distance in the final, with McKinney challenging initially before he was spun aside which would later earn Dylan McCann a disqualification. The man on a real charge though was World Champion Gordy McKee, who powered past McNally to take up the running. Sensationally though Gordy hit trouble with just one lap to go! Anyone who thought he was showboating by slowing down around the final lap quickly realised he was in big trouble as plumes of smoke came from his car, but he was just about able to coast over the line to take the silverware with a blown engine. Rochford and Jackson completed the top three.