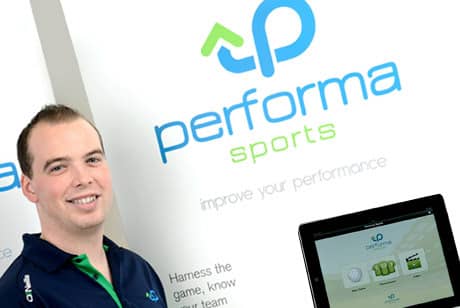 AN Armagh man is hoping to pull off a major result after his company was nominated for a prestigious Football Business Award.

Performa Sports, a performance analysis application for the iPad, will vie to be crowned winner of the Most Innovative use of Technology award at the inaugural ceremony in Stamford Bridge on November 8.

And Portadown-born founder Danny Turley says he is eagerly anticipating his trip to the home of Chelsea FC to compete against industry heavyweights such as ProZone Sports and Teamer.

“It’s a great opportunity to raise awareness of Performa Sports and to be mentioned in the same breath as the likes of ProZone and Opta is fantastic.”

What started out as a university project has now turned into a rapidly-growing business as statistical and video analysis continues to become a key component across different sports.

Performa Sports can count Mayo GAA, Crossmaglen Rangers, Armagh GAA, Derry GAA and Derby County FC among their growing list of clients, and have been featured on zonalmarking.com – one of the most respected football sites on the internet.

The company will also release a web product in January as it looks to continue to make a notable difference in how statistics can be used to study and improve sporting performance.

The app, which has been sold as far as America and Australia, currently supports GAA, rugby, hockey and soccer and will incorporate tennis in the next update.

“A key feature of the app is its ease of use,” said Mr Turley, a former nominee for N.I Young Entrepreneur of the Year and winner of the Growth Potential award.

“Other performance analysis tools can take too long to produce the results but with Performa Sports it’s instant.

“I have got a lot of positive feedback wherever I have travelled with the product. I met Manchester United Chief Executive David Gill at a conference in America and he was very impressed with it.

“I went to a conference in Loughborough University recently where the likes of ProZone were also present and the attention we received was fantastic.”

Mr Turley developed the idea whilst studying Interactive Multimedia Design at the University of Ulster after spotting a gap in the market for a fast and reliable statistical analysis tool and continued its development through his MA in Multidisciplinary Design.

And while he admits that the rapid rise of Performa Sports has taken him by surprise, Mr Turley credits the support given to him by Invest N.I and his supportive investors, that has allowed him to chase his dream.

“When I started I never thought it would go so far but the masters changed my mind set, I started to think bigger.

“Northern Ireland is one of the best countries in the world for starting a business. If you have a great idea, the people at Invest NI will support you every step of the way.

“It’s a bit of a whirlwind adventure; I don’t have time to think about it. Performa Sports just keeps going and going and I really love what I’m doing,” he added.