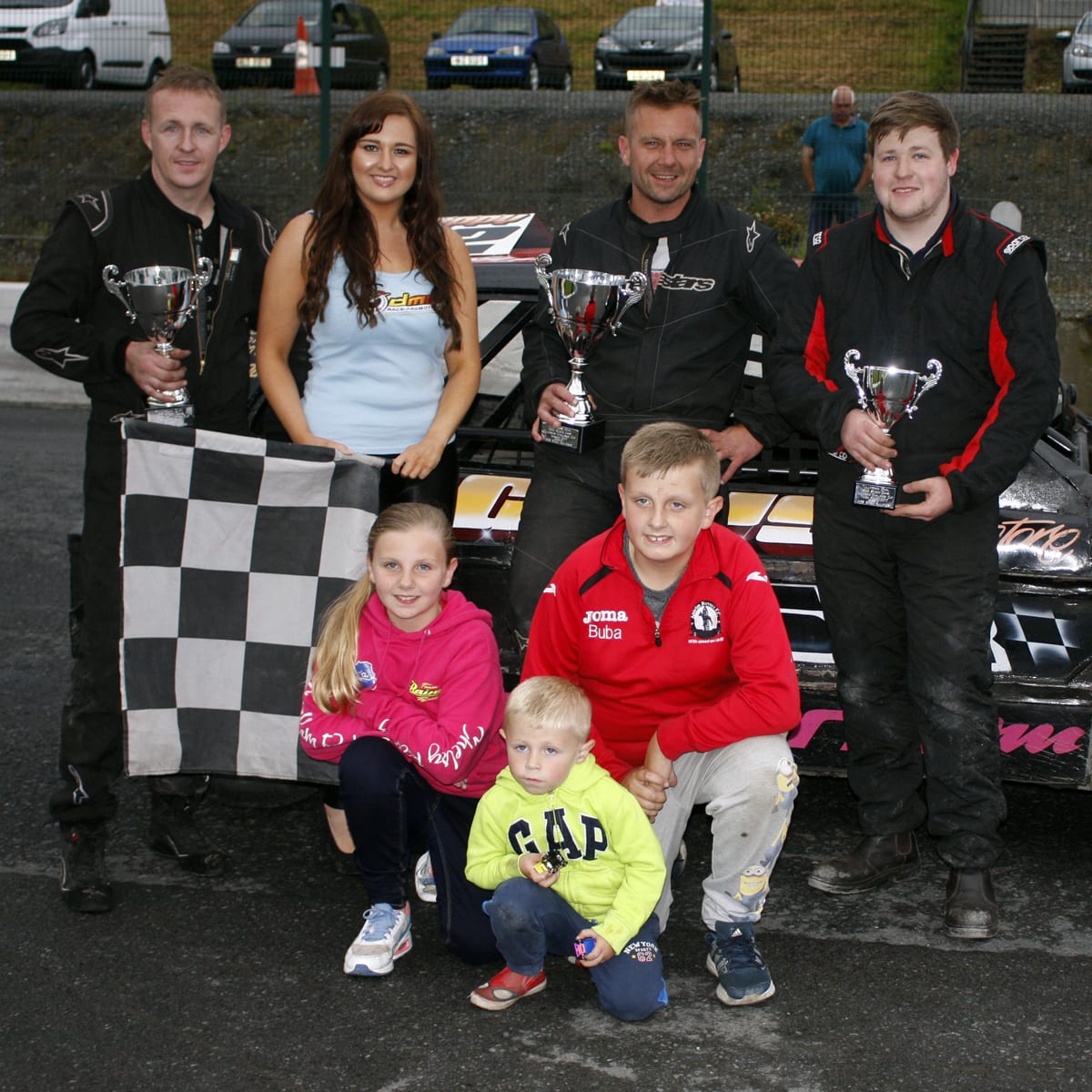 Annual Tullyroan Challenge Cup victories fell to Nutts Corner’s Aaron Rainey in the 1300 Stock Cars and Bleary’s Drew McKeown in the Junior Productions, whilst Banbridge ace Denver Grattan took the spoils in the second round of the Superstox NIOvalTV Series.

The other final winner at the DRS Steel Buildings sponsored meeting was Portadown’s Jordan Rochford in the Lightning Rods.

The rough and tumble 1300 Stock Cars produced some excellent action all evening, with the opening heat falling to Ballymena’s Peter Greer from the blue grade, ahead of a great battle for second which went the way of Jon McQuillan on the line ahead of Thomas McCrory and Aaron Rainey.

In the damp conditions of heat two Irish Champion Ivan Elliott took another good win in his new GRP car, even surviving a mid race caution period to take the chequered flag ahead of Michael Logan and McCrory.

Aggregate points formed the final grid, with Greer and McQuillan sharing the front row. McQuillan and McCrory contested the lead in excellent fashion once they got going, with Adrian McKinstry and Rainey joining in for good measure.

The bumpers were put to good use, and at one stage they headed out onto the back straight four abreast for the top spot! McCrory got spun aside, and it was Rainey who got ahead when it mattered to take the Tullyroan Challenge Cup win from McQuillan and Peter Greer. If the final was good, the Dash For Cash to end the meeting was even better! Unfortunately for Rainey he took a hard knock early on to bring out the caution flags, before we were treated to an epic six car fight for the lead.

Lap after lap McKinstry, Logan, Greer, McQuillan, McCrory and Elliott exchanged bumpers and the lead spot in what was quickly becoming one of the races of the year. Elliott was in the box seat as we entered the last lap, and as he went defensive heading to the final turn Greer and Logan came in hard behind him with the bumpers. Out of the melee Greer snatched an absolutely sensational win ahead of Elliott and Logan.

The local Junior Productions aces were joined by welcome Scottish visitor Cameron Willacy for his Ulster debut. Cameron and Callum Magill led them away in the opener, but Ballykelly’s Matthew Nicholl was catching the eye as he quickly swept through to the lead.

He took the first victory of the night over Adam Weir and Drew McKeown. Nicholl then repeated the dose in heat two, getting the better of a great dice with Gareth Halliday to take his second win of the evening. Graham Meek and McKeown worked their way through to second and third by the chequered flag.

Nicholl and Meek qualified on the front row for the final in somewhat damp conditions. Nicholl got knocked aside which would later see Weir penalised, as Meek and McKeown began a great battle for the top spot. Meek was favouring the wide line as he searched for grip on the slippery surface, but McKeown was able to slither under him to take up the running.

Despite Meek’s best efforts to come back, the Tullyroan Challenge Cup win fell to McKeown, with Ben Bruce impressing in third. The young drivers put on an excellent showing in the final in very tricky conditions indeed.

Another good showing of Superstox gridded for the second round of the popular NIOvalTV Series, with recent newcomer James Logan leading them off in the opener from the novice grade. He impressed by leading until past half distance, when Lee Davison powered through in his RCE machine to take the win over Irish Champion Denver Grattan and Logan.

Logan led Gregg Hyndman in the second heat, before a lap seven caution period when oil on turn three saw a number skittle into the wall and retirement. At the resumption Davison made short work of the remaining laps to take the win and earn himself a rise to the superstar grade. Gary Grattan and Stephen Stewart filled the places.

Andrew Morrow and then Lee Johnston led the early charge in the final, with Johnston settling in ahead of Adam Lockhart out front. Davison was again on the move, tracked by a repaired Denver Grattan after his heat two trip to the concrete.

Denver muscled his way past before Davison lost out when he tangled with Conor Murphy. D Grattan hit the front by slipping past Johnston three laps from home, taking the win ahead of Lee and Lockhart. Johnston also received a trophy from series sponsors NIOvalTV as top white/yellow graded car home. The night was rounded off by a Grand National, which saw Aaron McNeilly hold off the late advances of Denver Grattan to take a morale boosting victory.

Before the Lightning Rods has their opening race, the recently crowned World Champion Aaron Stewart was paraded to the fans to a rapturous welcome.

It was wet as they took the green flag for heat one, but former British Champion Jordan Rochford was in tremendous form as he scythed through the field to take a super win over Irish Champion Richard Stewart and Ricky Shaw.

It was great to see Tim Hazlett back in Lightning Rods action in a newly acquired car, as Vince Litter stamped his authority all over heat two. He took a commanding win ahead of Ally Neill and Mark Corry.

The final started on a wet track and was an excellent encounter, with a five way lead battle developing between Rochford, Litter, Scott Cochrane, Neill and Shaw. Rochford really had the bit between his teeth, as he superbly clung to the outside groove to relegate the pack and hit the front.

Just as it looked all over bar the shouting, the track was beginning to dry, and dry fast. That brought Richard Stewart and Neill into play, having obviously opted for a set-up more suitable to the conditions now. Rochford just held on though for what was a great win, with R Stewart, Neill and Litter next home.

The next racing at Tullyroan Oval is this Sunday, July 23rd (1pm start), featuring the biggest event of the season at the local track, the 2.0 Hot Rods 2017 Championship of the World.

Also up for decision will be Irish Open Championships for the Lightning Rods, the Ninja Karts and the ProStocks, as well as the Irish Masters for the 1300 Stock Cars.

A whole host of visiting drivers will be in action on what is sure to be a memorable day of top class race action.