Great day for Scots at oval 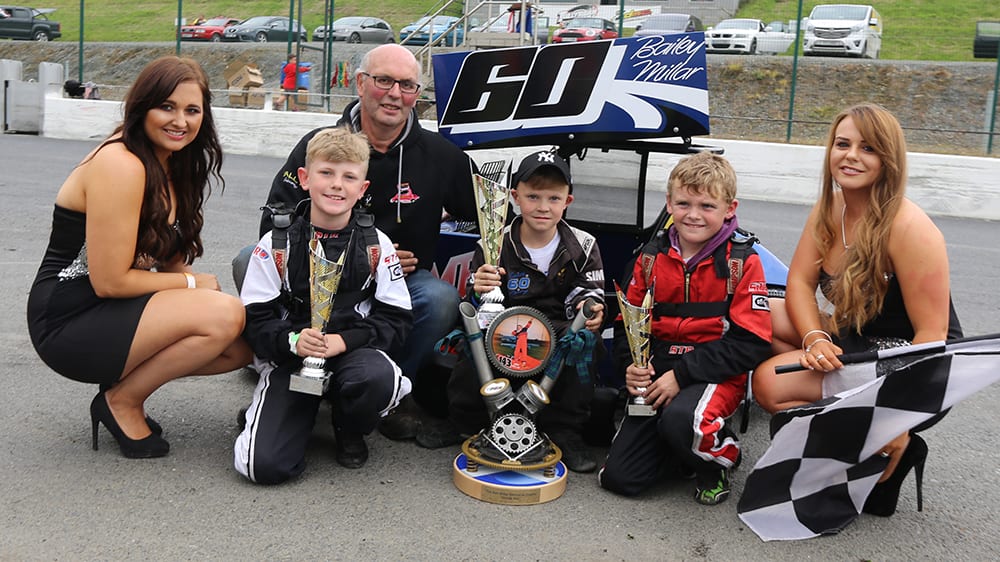 An exciting afternoon of international oval racing thrilled the fans at Tullyroan Oval on Sunday afternoon.

The only local winner at the meeting, sponsored by Hollytree Rare Breeds Farm, was Glenavy’s Dan Shannon in the ProStocks Irish Open Championship, as County Waterford’s Pat Casey took the other feature race win in the 2.0 Hot Rods

After Shane McMillan’s British Championship win at Aghadowey the previous evening, another great field of Stock Rods arrived to do battle for the Tullyroan Challenge Cup. The opening heat saw the first of the Scottish wins of the day, as Gary Dean held off allcomers to take the flag.

Chris Hamill grabbed second late on after Siobhan Martin got into trouble on the back straight. Heat two saw a flag to flag win for the Limerick’s Colm O’Sullivan, with a great places battle falling to Samuel Montgomery ahead of Jonny Cardwell and Surrey’s Eric Walker.

O’Sullivan assumed the lead in the final with the pack squabbling at his heels for the opening few laps. Lattka then seized his chance when O’Sullivan was forced wide, darting ahead to a lead he held right to the flag.

England’s Matt Woodcock inherited second and Dean third for a mainland top three, after Hamill was docked from third to fifth for his part in O’Sullivan’s demise during the race.

The opening Irish Open Championship qualifier for the ProStocks fell to Glenavy’s Dan Shannon, who picked up where he left off the night before having won the British title at Aghadowey.

Adam White and William McFaul chased him home, before Dylan Booth took the second heat ahead of Scotland’s Paul Barron and White.

A great battle for the lead between the trio of Shannon, McFaul and White thrilled the fans during the opening laps of the Irish Open Championship, before White and McFaul found themselves buried hard in the turn four wall. Shannon pulled clear to take his second title of the weekend in some style, as a great battle for second ensued behind him as the positions swapped time and again.

Booth was ahead when it mattered most and took the runner up slot behind Shannon, with Barron in third.

There were three action packed races for the Ninja Karts as they contested the Keir Millar Memorial Trophy, held in memory of the young Scottish star who was cruelly taken from us a few years ago.

His cousin Bailey Millar inherited the first heat win after Toby Tyson from Cumbria was docked for contact during the race. Millar then powered home to the win in heat two to guarantee himself pole position for the final.

Millar lost out to Tyson off the line in the final, but he quickly swooped back ahead to race home to take the memorial trophy is some style. It was a very emotional win as Bailey hoisted aloft the huge Keir Millar Memorial Trophy in memory of his cousin. Max Hobson took a gallant second ahead of Tyson in third.

An excellent turnout of Superstox included a debut for Ally Neill and a return for Darren Bevan after some time away, and it was welcome Scottish visitor David Frame who came through the field to land the opening heat victory over Chris McArdle and Lee Davison.

There was a very welcome first ever win for Jackie Harris in the second heat, the former Hillclimb and Sprint Champion showing the rest a clean pair of heels in his immaculate car to lead home McArdle and Frame.

Frame quickly went ahead in the Tullyroan Challenge Cup final, with Davison giving his all to stay in touch. As they headed for the last bend Davison went in with a huge lunge, making contact but failing to dislodge Frame from the lead.

David thus took the title win, with Davison and Kyle Beattie completing the top three. A special Dash for Cash race, jointly sponsored by the Moffett Family and LMC Trade Sales, concluded the day and fell the way of Davison after novice Brian Lammey had led for much of the distance.

Mervyn Emerson made the most of his yellow grading to take the opening heat win in the 2.0 Hot Rods, holding off British Champion Stuart Cochrane and Brian Cherry at the flag. Cherry improved in the second heat to take the win over Emerson and European Champion Adam Hylands.

The final looked as though it would boil down to a fight between Emerson and Hylands for the silverware, as the duo lapped side by side whilst battling for the lead.

An awkward touch between the two heading out to the back straight saw them both career out of control, glancing the wall and spinning out of contention.

They opened the door for Pat Casey, and the Co Waterford man duly accepted the lead and the win to make his long journey home even sweeter! Gary Wilson and Conor Hughes were second and third after a great battle for many of the closing laps.

Racing continues at Tullyroan Oval this Saturday night when the coveted Lee Cherry Memorial Trophy for the 2.0 Hot Rods is the main event, alongside the grand final of the Ryan Wright Signs Iron Man Series for the 1300 Stock Cars.

Also in action are the Thunder Rods who will be joined by some visiting Premier Rods from Tipperary Raceway, as well as Lightning Rods and Junior Productions.