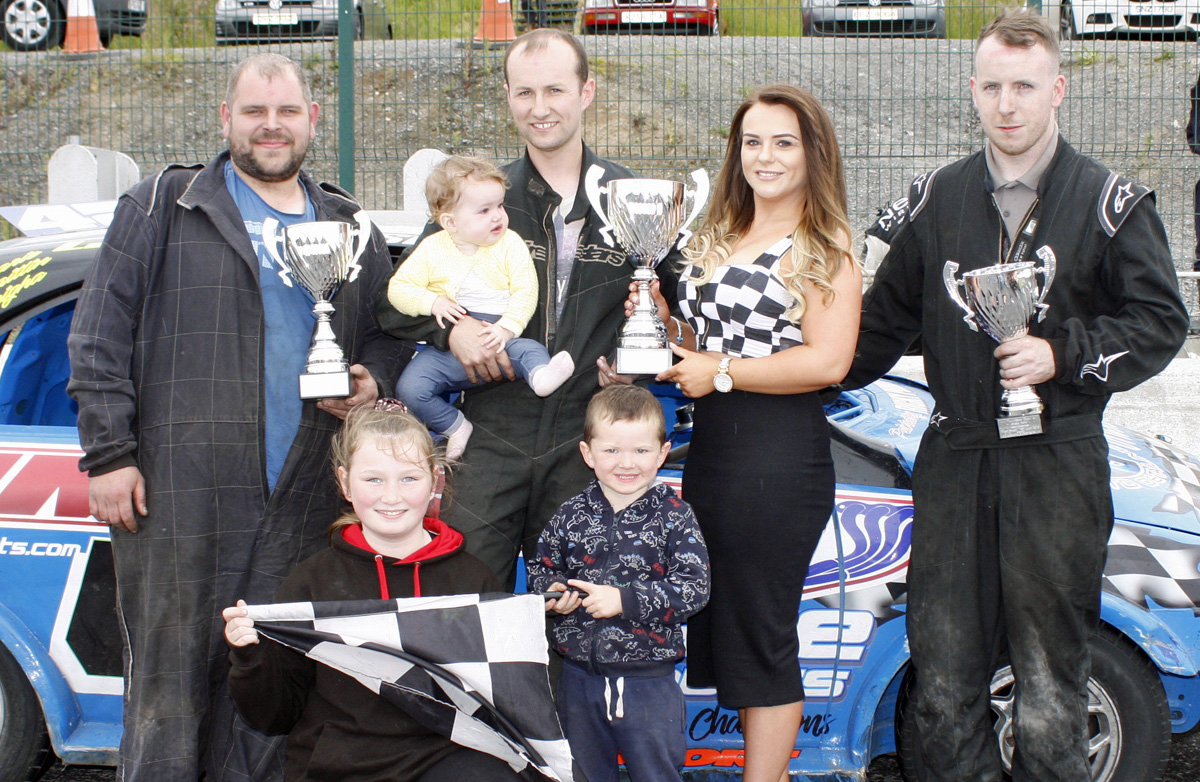 Ballinderry’s Jonny Cardwell added yet another title to his CV when he claimed victory in the Stock Rods Irish Masters at Tullyroan Oval on Sunday afternoon.

Jonny held sway out front ahead of a packed international field to record the win to add to his Irish Open success of earlier in the season.

Once again three qualifying heats were required for qualification for the Stock Rods Irish Masters, with the entry headed by newly crowned European Champion Derek McMillan. National and Irish Champion Curtis Greer took the opening heat win ahead of a tough battle for second between Gary Butler and Micky McFall. Heat two saw Jonny Cardwell the man to beat as a huge battle raged in the midfield. Cardwell took the win over Stephen McCready and England’s Max Bradburn.

The third qualifier saw McMillan take a clear win over Dan Shannon and Niall McFerran. Cardwell and leading Scottish lady racer Siobhan Martin shared the front row for the Irish Masters final, with Cardwell the first to show over McCready and Martin. It was so close lap after lap, with literally nothing between the top runners. Butler got past Martin to go third, before McCready mounted a brave late bid for the title.

He dragged himself right alongside leader Cardwell on the tough outside line, but despite his best efforts he just couldn’t make it stick in the end. Cardwell crossed the line to lift the Irish Masters title, with McCready great value in second ahead of Butler and Martin.

McFall and Crawford led them away from the front row for the Irish Open final, but McFall unfortunately clashed with Meek early on which eliminated both from the proceedings.

Crawford had all under control though as he completed the 20 lap distance to take the flag and the title.

Behind the Ballymena driver, Jack Morrow had his best result to date in second ahead of Sam Percy, after third over the line Matthew Nicholl was disqualified for a technical infringement.

The Lightning Rods excelled all afternoon, producing three superb races. Ronan McNally led much of the distance in the opening heat until challenged by Mark Corry. Nigel Jackson, Jordan Rochford and Richard Stewart were right in the mix too over a fantastic last few laps, with Jackson using all his experience to land the win over Stewart and Martin O’Flaherty.

Ally Neill was back in a Lightning Rod for his first outing in quite some time, and he led the second heat until challenged late on by O’Flaherty. Martin drew right alongside over the last few laps, but Neill held on for the win, with Corry taking third.

McNally and Neill disputed the lead in the final, with the star graders pulling themselves onto terms as the race progressed. Jackson produced a stunning outside line run to move from fifth to the lead, followed closely by a very impressive Ricky Shaw. Shaw looked marginally quicker as the laps ran out, but Jackson had enough to keep things under control and take his second win of the day. Shaw, Stewart and Rochford completed the places at the end of a great day for the formula.

It was great to see a good field of Classic Hot Rods present, with Gerry Rothwell heading Adrian Boyle in the opener. Clive Richardson squeezed past to take the win over DMC promoter Davy McCall and Anthony Morgan. Richardson and McCall were never far apart for the rest of the afternoon, Clive taking another victory in heat two over Davy after a breathtaking battle.

If the second heat was close between old Shamrock Park foes Richardson and McCall, the final was even closer as they traded paintwork time and again, but always with the utmost of respect. All the while though Morgan was inching ahead out front and he took the honours in some style, with Boyle taking second ahead of McCall who had sneaked past Richardson late on with an audacious move into turn three.

Back to Basics Bangers

The Back to Basics Bangers are the real entry level class of oval racing, and it was local man Alan Haugh who took the first heat in his Ford Puma, having traded places with his brother Steven who had to make do with second. Alan Haugh then nearly rolled in heat two, whilst Steven was also on the end of a hefty knock on the back straight.

Josh Goligher romped home to the win after another entertaining race, with Gary Simmons in second.

The final was a cracking contest, with loads of action before leader Timmy Davidson lost out to Goligher. A backmarking Steven Haugh then took Goligher out of contention, allowing Alan Haugh to hit the front. As he cruised to what looked like his second win of the day, a jammed throttle saw him crash out on the very last lap! Davidson couldn’t believe his luck as he raced past to grab the silverware.