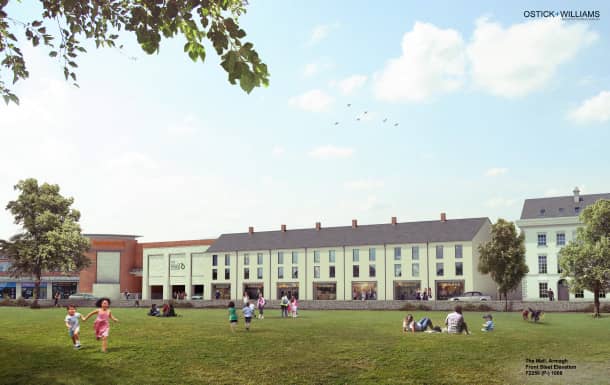 Work on a major new retail development at the Mall is due to start early next year, it has been confirmed.

Next to the historic Mall in the city, the development site consists of part of the existing multi- storey car park, adjacent land towards McCrum’s Court and the building previously occupied by the Department of Agriculture and Rural Development.

This important city centre site was identified as a key regeneration priority in the Armagh City Masterplan, which was published in May 2009.

“The site offers a unique opportunity to regenerate this part of Armagh city and to connect the commercial centre of the city with one of its major assets, the Mall. The development will be a major boost for Armagh and create new retail space right in the heart of the City Centre.”

Minister McCausland continued: “My department, in partnership with the Department for Regional Development, will commence site assembly to ensure the regeneration benefits are fully realised, creating jobs and new rateable retail space. I am committed to delivering regeneration and economic development across Northern Ireland and the historic city of Armagh is part of that.”

Minister Kennedy said: “This is an exciting project which will facilitate much needed private sector investment and economic activity in Armagh, as well as the creation of jobs in the construction and retail sectors. It is an excellent example of how collaborative working, between two government departments, can produce real benefits for the community.”

The process to assemble the site will commence shortly, ensuring that the project progresses quickly to the next stage.

Last month Armagh I revealed that the plans for the development were due to be approved this month.

In June, two applications relating to the proposed development had been readvertised.

The Mall Shopping Centre will see a major extension to the existing premises with additional units and extension to existing car park.