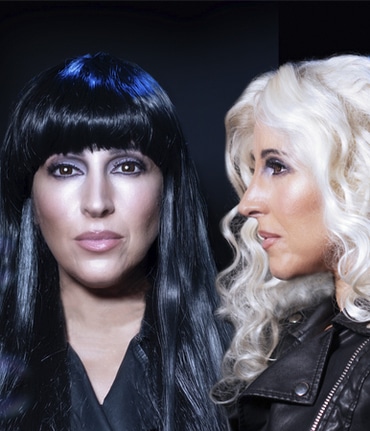 Trisha McCluney-Essentially Cher is Ireland’s only Cher tribute act/impersonator, having exploded onto the scene back in 2019.

Since then Trisha has gone from strength to strength and is in high demand as one of the UK’s best tribute act to the Goddess of Pop. Despite having what one would consider a very short career to date as a tribute to Cher; what Trisha has managed to achieve in that time is nothing short of remarkable!

Nominated for ‘Best Tribute Act’ at the National Entertainment Awards in 2020 where she reached the final and has just received a nomination for 2022 awards.

Trisha continues to engage with her devoted fans and has amassed a very large and impressive following of professional and celebrity credentials, including none other than top US Cher Drag impersonator Chad Michaels. She even received a private message from Winner of RuPaul’s UK Drag race ‘The Vivienne’ congratulating her on her ability to mimic Cher with “extreme accuracy”.

Trisha’s Cher has been in huge demand across the UK and now reaching audiences into Europe.

Having just returned from appearances in Cyprus and she has been such demand that Pride organisers are falling over themselves to book her. Essentially Cher is due to perform at Malta Pride this September and will be returning as Headline act for Drogheda Pride, she has also just confirmed a slot at the Isle of Man Pride in August 2022.

No stranger to travelling with her multi-tributes also excelling as (Shania Twain and Lady Gaga) Trisha has just returned from Blackpool where she showcased Essentially Cher, wowing UK booking Agents.

She was also contacted by a US based agent who saw a video of her on Youtube and told her that they had searched and searched but never came across a Cher tribute who can quite nail it but that Trisha ticked all the boxes.

Trisha began rehearsing her live band soon after her official launch with the aim of steering the show towards live music venues, hotels and ultimately theatres, with persistence and determination to continue perfecting her tribute to Cher despite the pandemic, this realisation is now coming full circle.

Pre covid her quick rise to success showed in an exciting booking to support Gloria Gaynor in concert, however, logistics and continued forced reschedules of such a large scale event has sadly meant this could no longer be viable.

Her drive and passion in making her show a success meant that even Covid would not stop her and her fans who ‘Believe’ in her impressive ability to pay the most accurate tribute to Cher seen on these shores.

Trisha is from Ballyclare, a shining example of the talent Northern Ireland has to offer. Having turned down other promoters on UK mainland before, she is now ready to bring her theatre show to audiences on the homeland working alongside Musicon Entertainment with the aim of bringing her shows across the Island of Ireland and further afield where possible.

Where can you see her?
Trisha has a residency performing her solo shows quarterly at the Cabaret Supper club in Belfast and will spend the rest of the year she will be travelling back and forth from Europe and England to Scotland so, be sure to catch a show when you get the chance!

Her theatre tour kicks off at The Portico of Ards, Portaferry on May 14, closely followed by the Marketplace Theatre, Armagh on June 17. More exciting dates are to be announced with her fully
live show coming Kelly’s, Portrush, Seagoe Hotel, Portadown and Time LIVE in Cooktown. You can keep up to date with all show announcements on her website essentiallycher.co.uk or on Facebook
@trishaascher or check upcoming events at musicon-ent.co.uk