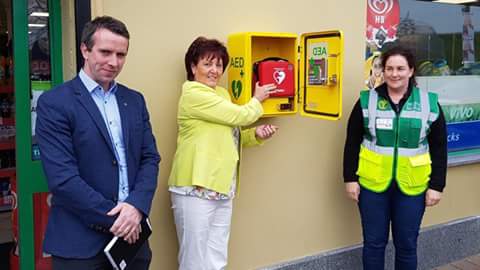 Another local community is ensuring it is prepared should the worst happen.

This past number of years has seen the provision of defibrillators at rural towns and villages and isolated areas.

And it is the communities – the local people – who have been putting the work and funding in to have them on hand.

The most recent has been provided at Donnellys in Silverbridge.

Among those present and asked to speak at the installation was local Councillor Barra O Muiri, who congratulated all involved with the initiative.

“This fantastic resource was funded by the local residents’ group through their weekly 50/50 draw, and could save a life if ever called upon,” said the Sinn Fein representative.

“Many thanks to all those who contributed to the installation of the box, the purchase of the defibrillator, and to the First Responders representatives who came out and explained how the device works. Christine and Margaret announced that there will be training made available for residents and anyone interested in the near future. Maith sibh gach duine!”