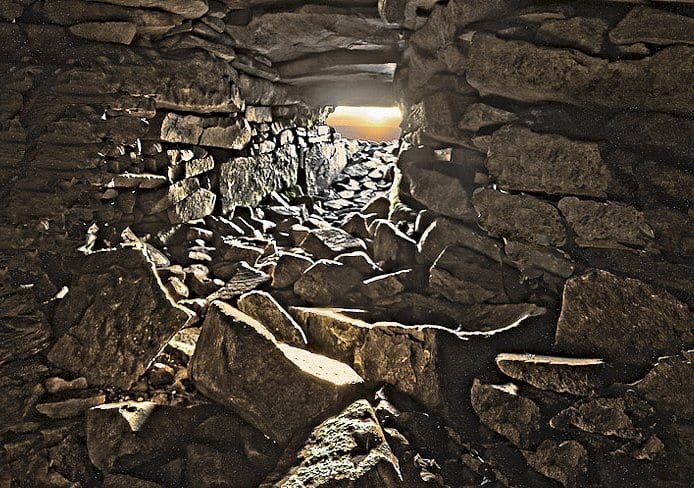 The call went out at the end of April and some 30 brave souls responded!

Volunteers have successfully trekked to the top of Slieve Gullion to prepare the famous Passage Tomb.

They set about their task on Saturday after stones had become dislodged.

The ancient cairn on the summit of Slieve Gullion was badly in need of repairs as a result of the accidental damage caused by the thousands of visitors to the site each year.

The Ring of Gullion Landscape Partnership, part funded by the Heritage Lottery Fund (HLF), appealed for volunteers to help with the restoration. At around 5000 years old, the Passage Tomb is one of the oldest in Britain and Ireland. It was built by Neolithic (New Stone Age) people, possibly to honour their ancestors and be closer to their gods.

The passage is aligned to the setting sun of the Winter Solstice – or shortest day – so that, as the sun sets, the light shines down the passage and lights up the back of the chamber.

Over the last few years the cairn has begun to show signs of damage due to its increased popularity. The passage into the cairn was slowly becoming blocked with loose stones, as visitors make their way from the summit markers down the steep slope to the passage entrance.

Alison Henderson from the LP said: “In the last decade the summit of Slieve Gullion has become an increasingly popular site with visitors keen to experience the climb, the spectacular views and the opportunity to explore the Passage Tomb.

“The popular route from the summit marker down the steep slope of the cairn to the passage entrance is causing the loose cover rocks to fall down the cairn slope and into the passage. If nothing is done the passage will become impassable.”

Under the guidance and supervision of Martin Keery, Inspector of Historical Monuments for NIEA, volunteers stepped in to help protect the cairn by removing and redistributing the stones from the passage.

Paul Mullan, Head of HLF Northern Ireland, said the heritage asset had deserved a “good dose of TLC” to reverse the accidental damage caused by its popularity.

All involved were delighted with the response and success of Saturday’s operation.