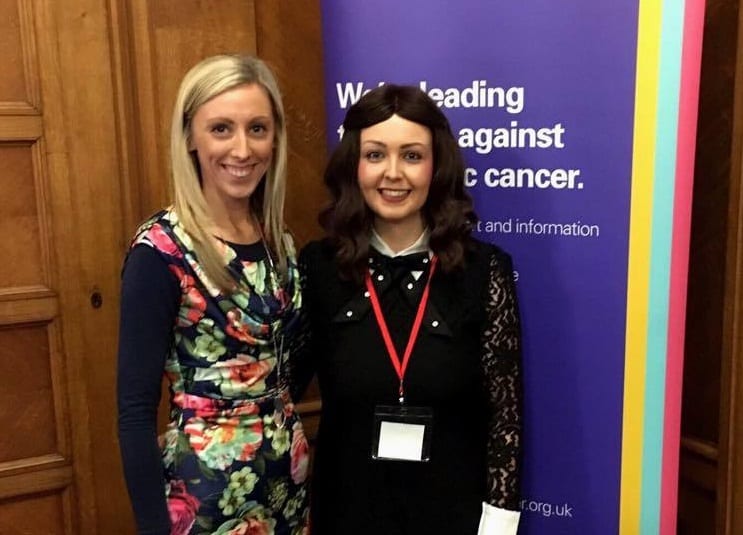 A County Armagh woman who lost her grandmother to pancreatic cancer is urging others to be aware of the need for early diagnosis.

Victoria Poole, from Scarva, wants to use World Pancreatic Cancer Day today to try to prevent people dying and is campaigning to raise awareness of the deadly disease.

Her first and only experience of cancer in her family ended in heartbreak when her grandmother Isobel Turner died from the disease in June 2014.

The 25-year-old has now become an avid supporter of Pancreatic Cancer UK in Northern Ireland and hopes that, by working together, policy-makers, clinicians, researchers, charities and those affected by pancreatic cancer can take on this devastating disease together, to change the pancreatic cancer story.

Like so many other people with the disease, Mrs Turner had been suffering from abdominal pain for a few months two years ago and had lost some weight.

She sought medical advice on a number of occasions to address her concerns and was told she had a suspected case of diverticulitis, which is inflammation of the colon.

Victoria takes up the story: “My nanny’s GP referred her for a hospital appointment to undergo some further tests to clarify her symptoms. Due to hospital waiting times, it would have been some time before she was seen.

“My nanny had private health care and was fast-tracked to a hospital consultant for a colonoscopy in October 2013.

“That came back clear for diverticulitis, but she was still having pain and so it needed further investigation. So she was sent for an MRI scan which revealed the cancer.

“Thankfully she was fast-tracked again, because otherwise she might well have died before the final diagnosis was made on November 21, 2013.

“Nanny didn’t have any chemotherapy, as the cancer was too far advanced by the time she was told what it was. With pancreatic cancer, only an operation can give the patient a chance of survival.

“This was my first and only real experience of cancer in my family, which ended in heartbreak when I lost my nanny to the disease in June 2014 – just seven months after being diagnosed and told that her condition was terminal. We were all left heartbroken.”

The statistics behind pancreatic cancer in Northern Ireland are alarming.

Around 9,400 people were diagnosed across the UK in 2014, with over 8,800 dying from the disease the same year. The figures for Northern Ireland were 208 and 232 respectively.

Pancreatic cancer is the 11th most common cancer in Northern Ireland but the 5th biggest cancer killer. It is the cause of nearly six per cent of all cancer deaths in NI each year.

One person dies of pancreatic cancer every hour, and just 5.5 per cent of patients in Northern Ireland live for five years or more after diagnosis.

Victoria added: “Lack of knowledge about the disease and its symptoms is extremely worrying, because it may delay people in Northern Ireland being diagnosed, like in my nanny’s case.

“The five year survival rate for Northern Ireland is just 5.5%. One year survival is just 20.8%. This level of survival has barely changed over the past 40 years.

“These survey results issue a stark warning about low levels of awareness in Northern Ireland about the deadliest cancer with the lowest survival rate of all the 21 common cancers.”

The highlighted symptoms of pancreatic cancer to look out for include stomach pain, weight loss, yellow skin or eyes or itchy skin, and oily, floating faeces.

Following on from the poll findings, Pancreatic Cancer UK is calling for people across Northern Ireland, including GPs and healthcare professionals, to learn more about the disease and its symptoms by taking part in the charity’s new symptoms quiz at www.pancreaticcancer.org.uk/symptomsquiz and to share it on social media.

The swiftness of how the disease advances is something that leaves loved ones reeling, including Fifty Shades of Grey movie star Jamie Dornan, from Holywood, Co Down, who lost his mother Lorna to pancreatic cancer when he was aged just 16.

On Monday past, November 14, Victoria attended Pancreatic Cancer UK’s Policy event at Parliament Buildings, Stormont which seen the launch of their Patent Charter.

She was invited to speak at the event where she had the opportunity to address MLAs on the issue.

Pancreatic Cancer UK’s Patent Charter outlines the care people should expect, in terms of assessment, diagnosis and treatment, management of symptoms and side effects, support for families, and end of life care.

The charity hopes the Charter will change the lives of people affected by pancreatic cancer in Northern Ireland by empowering them to know what to expect from their care, from diagnosis onwards.

Pancreatic Cancer UK is encouraging people with pancreatic cancer in Northern Ireland to download the Patient Charter from www.pancreaticcancer.org.uk and discuss it with their medical team.