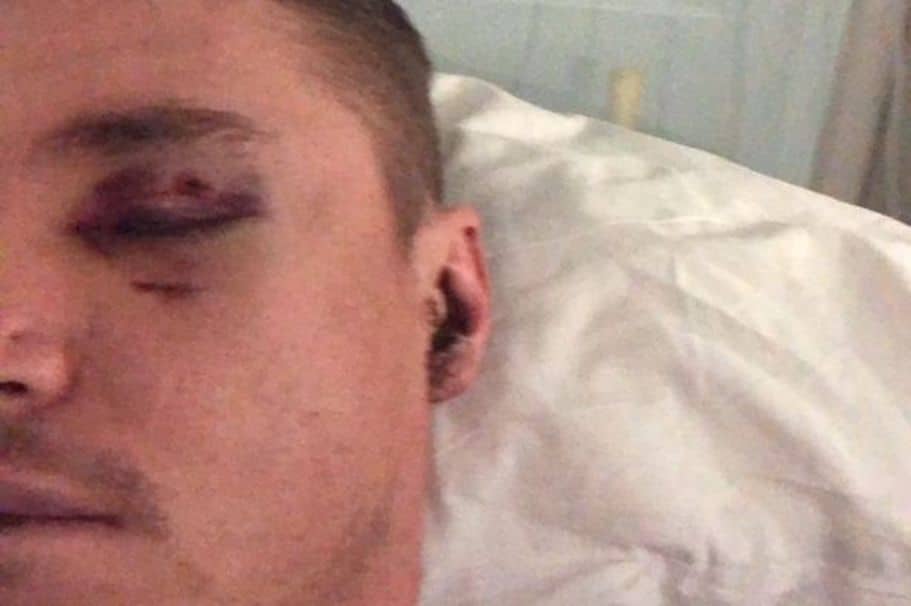 Down GAA player Caolan Mooney in hospital following the attack

Two men who admitted involvement in a 44-second fight which left a Down senior footballer with a fractured skull and his neighed a broken nose were handed suspended jail sentences today (Monday).

With 37-year-old Lee Daniel McKay appeared at Newry Crown Court via videolink from a solicitor’s office in Australia and his co-accused Ruairi Connolly appearing in court in person, two of the charges were put to them again.

McKay, who resides in Australia but whose address is listed as Drumalane Park in Newry, entered a guilty plea to causing an affray at Merchants Quay in the city while Connolly, from School Meadow in Newtownhamilton, admitted causing grievous bodily harm to Caolan Mooney on 30 December last year.

In an agreed statement of facts, prosecuting counsel Fiona O’Kane told the court Patrick and Caolan Mooney had been out celebrating a family christening and were heading home at around 2.30 am when “they were subjected to verbal abuse from an unidentified aggressive female who then threw a bottle at them”.

A young disabled man using crutches was hurt by the class shards and when he was chatting with the defendants, “he pointed in the direction of the Mooney brothers as the believed perpetrators of his injury”.

“In a misguided sense of defence of their friend, both defendants approached the Mooneys,” said Mrs O’Kane, adding that Connolly hit Caolan Mooney once to the face causing him to fall and hit his head, rendering him unconscious while McKay struck Patrick Mooney several times.

Describing how the entirety of the incident lasted 44 seconds, she said Caolan Mooney sustained a fractured skull which caused a small bleed on his brain, but did not require surgery, while his brother suffered a broken nose and various cuts and bruises.

McKay and Connolly were arrested and interviewed during which they “accepted responsibility for their behaviour, were remorseful for their conduct and explained they mistakenly thought they were acting in defence of their friend”.

Counsel for the defendants highlighted that each of them had clear records, had entered guilty pleas and had shown “genuine remorse” for their actions.

Judge Gordon Kerr QC sentence Connolly to a two year jail term and McKay to a nine month sentence but suspended both terms for three years.

In addition, he ordered McKay to pay Patrick Mooney £1,500 in compensation explaining that when it comes to criminal injury claims, they often defendants have to make contributions to that but as McKay lives in Australia, it would be more difficult to compel him to contribute.