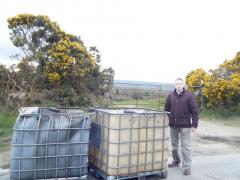 More cubes of toxic waste have been dumped in South Armagh.

The latest incident associated with the illegal laundered diesel trade happened near Forkhill and comes less than two weeks after five tons of sludge were dumped at Newtownhamilton.

“The community in this area are fed up with these attacks on the environment and themselves,” he said. “They take pride in their district and the label ‘Area Of Outstanding Natural Beauty’ that is attached to it.

“I would call on those engaged in this dumping of toxic sludge to cease their poisoning of the countryside and to think of damage to the health and good name of South Armagh that is occurring.

“The victims of their actions are their own neighbours and relatives. Ultimately it is the ratepayers of South Armagh who are picking up the bill for the clean-up of this dumping.

Sinn Féin Westminster candidate Mickey Brady has called on more to be done to combat the scourge of illegal fuel laundering and the dumping of the sludge.

“While we welcome the introduction of the new dye which has been added to off road diesel north and south I feel that more action can be taken to frustrate the efforts of diesel launderers,” he said.

“In 2013 the South introduced a system whereby green diesel is tracked from supplier to customer.

“In just over 12 months the sale of green diesel fell by around 10% and the sale of road diesel increased, bringing in over 150 million euro more to public funds.

“This system needs to be replicated in the North, so increasing public funds and reducing the levels of laundering and dumping.”