Time is ticking for the search of Armagh’s top volunteer 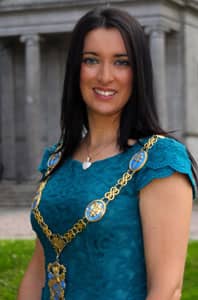 LORD Mayor of Armagh City and District, Sharon Haughey-Grimley, will host this year’s Lord Mayor’s Awards ceremony onWednesday 19th June in Armagh City Hotel, where the winners will be announced.

Lord Mayor Haughey-Grimley said “I hope people from all walks of life and backgrounds get involved this year: “Over the pasteleven months as Lord Mayor of Armagh City and District, I’ve had the privilege of meeting hundreds of local people.

“The one thing I’ve been consistently impressed with is the sheer number of people who give their own time and energy to help others without seeking any real reward.  The Lord Mayor’s Awards are all about giving these individuals the credit they deserve and celebrating the work they do.

“If there’s someone you know who has supported community activities, created job opportunities or promoted environmental, educational, sporting or cultural projects in your community please put their names forward for theLord Mayor’s Awards.”

Thelma Gorman picked up the Volunteer of the Year Award, at last year’s ceremony for her fundraising efforts and daily visits to brighten the day of patients and carers. Thelma and her husband opened their home to young people with disabilities and Thelma offered every opportunity for these young adults, organizing many trips and outings for them.

Members of the Keady Youth Forum were awarded the Youth Cup for their work in the Keady community.

Closing date for nominations is Friday 31st May 2013 at 12 noon, with entry rules and nomination forms available by contacting the Lord Mayor’s Secretary, Cara Toner on (028 3752 9633) or by emailing cara.toner@armagh.gov.uk or by calling in person to the Palace Building or you can nominate online at www.armagh.gov.uk