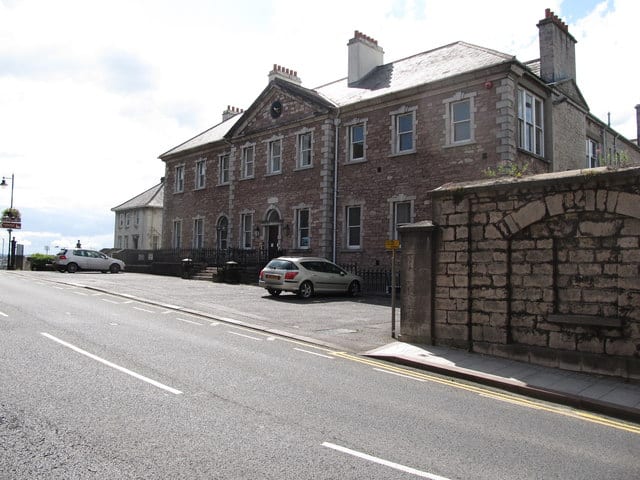 Crumbling walls and a sadly deteriorating porter’s lodge at the old City Hospital are to be given an injection – a cash injection – and it’s just what the doctor ordered!

Plans exclusively revealed in September to give the famous city landmark a much-needed make-over have been recommended for approval.

An application for the work had been submitted in the name of Armagh City, Banbridge and Craigavon Borough Council.

And today (Wednesday), planning officials will present a report on the proposal to a meeting of the council’s planning and regulatory services committee sitting in Banbridge in which they offer their blessing for the work to proceed. It’s long been in the pipeline and legacy funding had been agreed towards the work by the former Armagh City and District Council.

Two applications in relation to the proposals had to be submitted as Listed Building Consent was required to proceed on a structure which dates back to the 1700s!

The work will see a 20 metre portion of the boundary wall surrounding the City Hospital site being dismantled and rebuilt. It will be the same story for the porter’s lodge, that curious looking building, seemingly peeping out above ground level at the top of Dawson Street.

There will also be the restoration of the remaining section of the wall, new stone copings and the provision of new entrance gates and the associated alterations to car parking.

It will be great to see the work done. The porter’s lodge, as the name suggests, was the home of the porter who tended to the City Hospital. And, while something of a famous site in the city, it is now sadly in a state of deterioration.

But that is about to change.

While it will be demolished, it will be reconstructed – very carefully, brick by brick – and moved slightly back!

Brand new decorative gates – with specially cast railing heads – will feature at the entrance to the complex.

There were no public objections to the proposal and the Historic Buildings Unit is also happy for the work to proceed.

The old porter’s lodge structure is used currently to shield an oil tank and only has two facades remaining.

The property is situated within the confines of the development limit as designated for Armagh.

Demolition of listed structures is not allowed unless there are exceptional reasons why they cannot be retained in their original form or reasonably modified.

Road safety was the reason given by Armagh, Banbridge and Craigavon Council as to why the demolition of the porter’s lodge and part of the roadside boundary was required, as it would provide improved visibility in a northerly direction.

Other alternatives were considered, but this proposal was seen as the only viable option in terms of reducing the extent of boundary removal.

It also preserves a part of Armagh’s cherished history and ensures a clean bill of health for future generations!