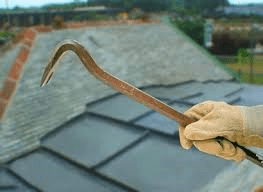 Police in Armagh are appealing for information following the report of a theft from a building  site in the Drumilly Road area on today (Thursday), February 27.
It is believed that  four large sheets of lead were taken from the roof of a building under construction sometime between 4pm on Monday, February 24, and 9am this morning.
Police would ask any scrap dealers that have been offered grey coloured lead sheets, measuring approximately 15ft x 2ft, or anyone who noticed any suspicious activity in the area to contact them in Armagh on 0845  600 8000 quoting ref 351270214. Information can also be passed anonymously  through the independent charity Crimestoppers on 0800 555 111.
This is the latest in a series of lead thefts in recent years, given the prices available to the thieves.
Previous targets have included a local church and two city centre primary schools, The Armstrong and St Malachy’s.

No more ‘ecar’ spaces planned for city and district

Armagh aims to put Navan on par with Taj Mahal!