The Portadown athlete with her sights set on Commonwealth Games glory 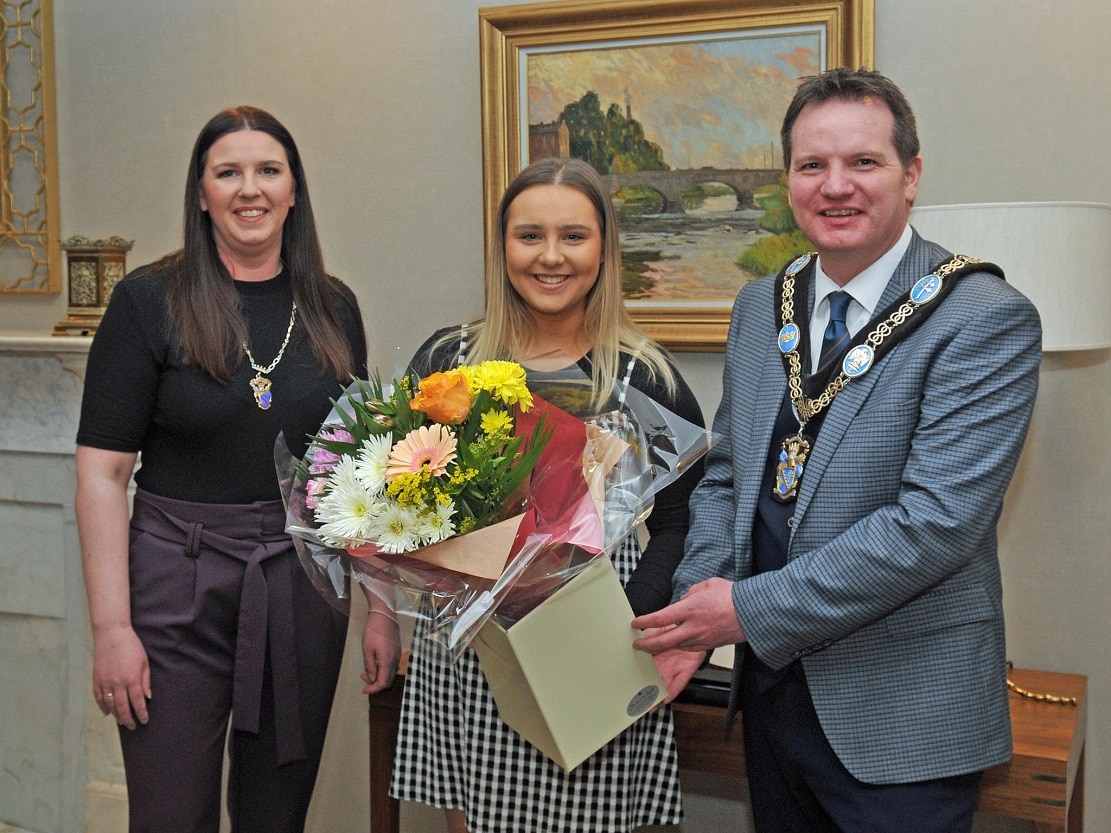 Chloe Wilson, receives flowers from the former Lord Mayor of ABC, Alderman Glenn Barr and to mark her selection to the Northern Ireland Lawn Bowls Team for the Commonwealth Games in Birmingham.

A Portadown student is set to head to Birmingham this July to compete in the Commonwealth Games for the NI Lawn Bowls team.

Chloe Wilson, who is twenty-years-old and is currently studying Adult Nursing at Liverpool John Moore’s University, has been involved in the sport for years, having began her career with short mat bowls.

She was enrolled in a junior outdoor bowls camp in Lurgan Park by her late grandfather Mervyn when she was just 12.

Chloe, who attended Portadown College before completing her A Levels at Banbridge High School, played league bowls at Lurgan Ladies for three seasons before making the move to Portadown Ladies for the 2017 season, where she still plays t0-date.

In 2015, at the young age of thirteen, Chloe got the call to represent the Irish U25 team in Greenock, which has enabled her to travel all around the UK.

In 2018, Chloe teamed up with club mate Lara Reaney and won the Northern Ireland Women’s Bowling Association (NIWBA) Pairs Championship, but was beaten in the Irish Semi Finals. Chloe was then selected for the Irish Emerging Squad in 2019.

Just after the Covid lockdown, Chloe was given an opportunity to represent Ireland at the elite level, due to a vacancy in the squad. Later on in the month, she secured her placed on the Irish Elite Squad.

After a successful summer for Team Ireland in 2021, the Commonwealth Games team was selected and Chloe was one of ten selected. The other talented female team members who Chloe will play alongside are Courtney Meneely, Ashleigh Rainey, Megan Devlin and Shauna O’Neill.

Chloe will represent Team Ireland at the European Championships that will be held in Ayr, Scotland just prior to the Games. Former Lord Mayor of Armagh City, Banbridge and Craigavon, Alderman Glenn Barr and Lady Mayoress Mrs Andrea Barr with Chloe Wilson, her family and friends at the reception to mark her selection to the Northern Ireland Lawn Bowls Team for the Commonwealth Games which are taking place in Birmingham, this July. Also included is Councillor Kyle Savage.

Chloe says that it is an “honour and privilege” to be able to represent Northern Ireland in the sport.

“Being fortunate enough to pull on that shirt to be able to compete against the best in the world will be an amazing experience and one I’ll certainly never forget. We have all put in all the hard work and we hope that it will show on the green and that we will have a tournament full of medals.

“The squad going to compete at the games is a very young group of ladies ranging from 37 years old to 20. This is proving that bowls is no longer a sport for people of enhanced years. I hope this will inspire the younger generation to join a club nearby and push themselves to be the best they can be.”

Chloe travels out to Birmingham with Team NI on July 24 with the opening ceremony taking place on July 28, and play commencing in Royal Leamington Spa on July 29.