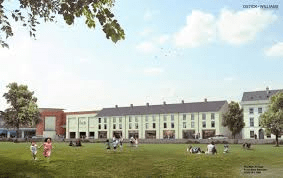 The on-off-on again saga that is Tesco, Armagh, is very much on again.

DoE Planning Service officials will once again present an opinion to approve the food superstore development at the former Fane Valley site when they go before Armagh City and District Council on Monday night.

The application had been presented at an approval during the meeting on the first Monday in January, but UUP Cllr Sylvia McRoberts, under new and agreed policy, had asked that it be deferred for a month.

The multi-million pound development, which will create 250 jobs, is now back on line.

It comes in a week when readvertised plans have been submitted for another multi-million pound retail development in Armagh.

The Mall West Shopping Centre has submitted for a major retail extension, consisting of additional units and car parking and the demolition of the former Government buildings on the Mall.

Next to the historic Mall in the city, the development site consists of part of the multi-storey car park, adjacent land towards McCrum’s Court and the existing Department of Agriculture and Rural Development building. This important city centre site was identified as part of the Armagh City Masterplan published in May 2009.

A planning application was lodged at that time but ran in to some difficulties. It is hoped, and expected, that the latest plans will be given the go-ahead within the next number of months.