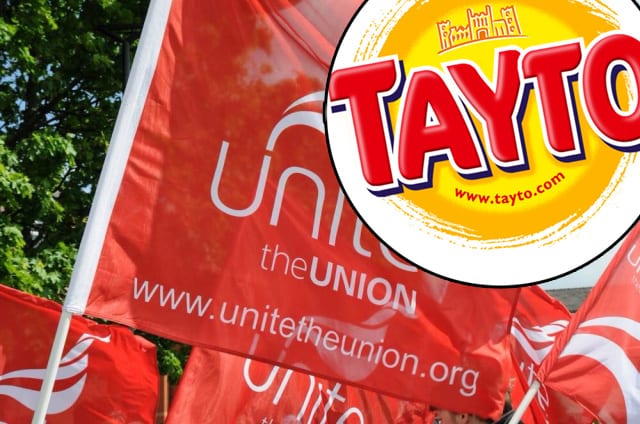 The the union insists that the Manderley Group is refusing to raise the wage to the legal minimum describing it as “morally unjustifiable”.

Sean McKeever, Unite officer for production and packaging workers at Tayto, was responding to a press statement issued by the Manderley Group which greeted a “narrow vote (52%-48%) against industrial action”.

Mr McKeever said: “Manderley Food Group is determined to maximise their profits at Tayto regardless of the cost to the workforce. They sought to ensure workers voted against industrial action by sending a menacing letter direct to employees’ homes.

“While the ballot was exclusively on the issue of poverty pay – management’s letter warned workers that demand volume for Tandragee was insufficient and that meant looking ‘at the impact this may have on the workforce’.

“The communication listed other UK sites where the Group had announced large-scale redundancies and referenced the ‘higher costs of production’ at the site.

“They warned workers that ‘job losses were a possibility’ and highlighted the potential for up to 80 workers to lose their jobs.

“The letter urged workers to vote no asking that they ‘consider the implications for you, your families and this plant’ of strike action at a time’ when this site is already under review for costs and volumes’.

“This intervention by management was focussed on intimidating our members; the majority of whom are women with dependents, by referencing the implications for their families so that they would back out of strike action.

“This is disgraceful behaviour from a group who announced pre-tax profits for 2015 of more than £7 million.

“At a time when they are telling those on poverty wages they can pay no more, the four directors of this company drew more than £1.7 million last year in director fees alone.

“These include members of the Hutchinson family, whose wealth was recently estimated at £105 million in the Times Rich List of 2016.

“Unite is discussing with our members the next steps in our fight to win a Living Wage and to safeguard jobs at Tandragee.”