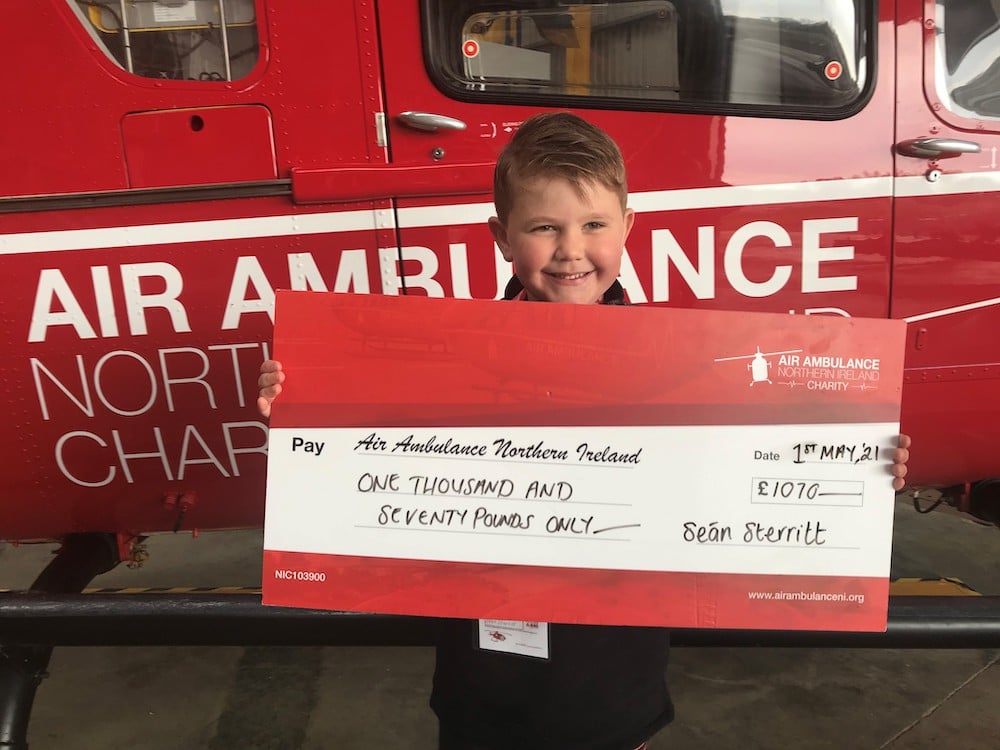 On Sunday February 21, 7-year-old Sean Sterritt and his father headed out for a leisurely kayak on the Cusher River in Tandragee.

Unfortunately, both Sean and his father were thrown from the kayak into the freezing cold water.

Sean’s father was washed ashore and despite frantic efforts he was unable to reach his son who was stuck in the water against a wall at the opposite bank.

Thankfully a local father and son were able to pull Sean safely out of the water and alert the emergency services.

Due to the severity of the incident, the Helicopter Emergency Medical Service (HEMS), flown by Air Ambulance Northern Ireland were tasked to the scene along with a number of emergency first response teams.

Sean has recovered well and as a result of his experience he wanted to do something positive that would potentially help another person who might need the air ambulance in future.

Sean’s mum Elaine said: “We wanted to do something that would give back. Air Ambulance NI is a wonderful service that we cannot take for granted.

“The service has been tasked to our council area 70 times in 2020 and it can only help people with donations to support its sustainability. We are so thankful that Sean wanted to do something and that’s him, he has so much grit and determination and we are so proud of him.”

Just two months after Sean’s ordeal in the water, both he and his father took on the mighty challenge of summiting Northern Ireland’s highest peak, Slieve Donard to raise funds for the lifesaving service.

The 7-year-old initially set himself the goal of raising £250 but was overwhelmed when his final total came in at £1070!

His mum said: “Sean is so grateful to every single person who donated to his Just Giving page and helped him smash his target.

“If the money pays half the fuel or pays towards saving somebody else’s life, it will have been worth it. Every step Sean took on that mountain really was to help ensure someone else got pre-hospital critical care if they needed it- every penny donated will help that cause.”

At the beginning of May, Sean and his family were delighted to be one of the first patient families to visit the air ambulance base with the easing of lockdown restrictions.

Sean was delighted to get a tour of the airbase and hear all about how his donation will help others who are potentially in life threatening situations.

Mum Elaine commented: “Sean has not stopped talking about his visit to see the air ambulance. He also signed up as a Junior Club member with the charity and so was delighted to wear his branded lanyard and bring along his teddy to get his photo by the helicopter.

“He was given a tour, had lots of questions answered and was delighted to hear more about the pilot’s role within the team, as this is something he’s really interested in.

“He was also given a copy of the charity newsletter and hasn’t put it down- that’s really helping him with his reading too! We are just so delighted that something that could have turned out to be a devastating situation has had such a positive outcome and we are extremely proud of our young boy who is a big air ambulance fan!”