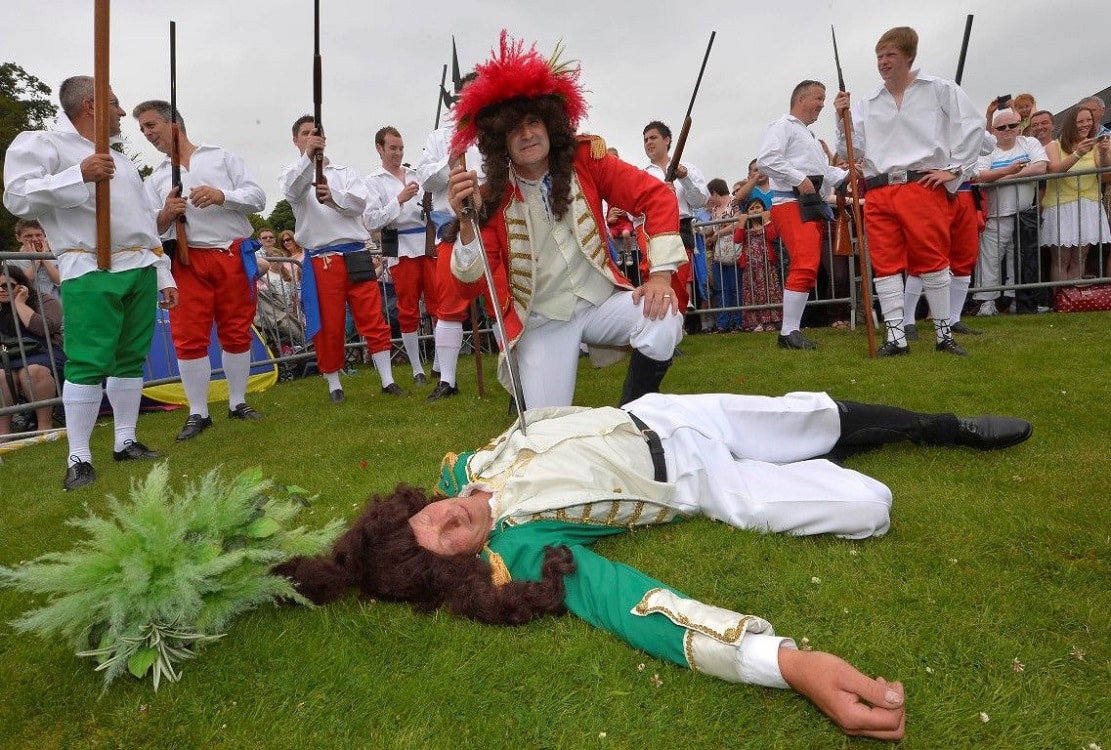 Following a hiatus of three years due to the pandemic, the ‘Royal Thirteenth’ in Scarva is set to make its return this year.

The annual ‘Sham Fight’, which is held in the quaint County Down village of Scarva, was cancelled due to Covid concerns in 2020 and 2021. Last year, Sir Knight Alfred Buller Memorial RBP 1000, who are based in Scarva and host the event, marked the day with a scaled down affair in the form of a short parade and wreath-laying service.

This year hopes to be a return to form as the relaxation of Covid restrictions mean that the Thirteenth can return to its former glory.

The mock battle between King William and King James and the large-scale procession through Scarva is slated to have upwards of 100,000 people in attendance, including approximately 70 marching bands. 4,000 members of the Royal Black Institution are expected to take part, led by flutes, pipes, accordions and brass bands.

The John Hanna Memorial Cup, which has been donated by the Buller family, will be presented to the musical outfit judged to be the best band on the day.

Sandy Heak, chairman of the Sham Fight Committee, said that the event has been in the planning for many months.

“Our aim is to plan an amazing event, one that will be really memorable for the visitors from near and far, and this is something that is unique to Scarva. “Everything points to a great day out: the thrilling spectacle of the Sham Fight, the huge procession and the incredible number of bands accompanying the preceptories.” The grounds of Scarvagh Demesne will form the staging ground of the great battle from which the Sham Fight derives its name.

The rival monarchs will arrive in the Demesne on horseback, dressed in late 17th century period costumes, accompanied by performers representing the Williamite and Jacobite armies.

With the Williamites in red and white, and the Jacobites in white and green, the Demesne will come alive to the sight of the colourfully dressed performers, the sound of blank shots from musket fire and the clash of swords.

As part of the re-enactment scenes of the Battle of the Boyne, King William is played by John Adair and King James by Colin Cairns. John Adair, who has been playing King William for almost 30 years, said the Scarva Sham Fight is unique in Ireland and that he hopes that the absence due to Covid hasn’t set him back.

“I may be a bit rusty, but I don’t think this July 13 will see any change in fortune when the battle ends,” he said.

“We look forward to getting the usual terrific response from the crowd, and we will do our utmost to deliver an exciting event that can be enjoyed by all the family.

He added: “The Scarva preceptory is very proud to maintain the tradition of the Sham Fight. It is a day of historical significance, and we are eagerly looking forward to this year’s event, particularly after the two-year absence.”

Rev William Anderson, Sovereign Grand Master of the Royal Black Institution, said: “The procession and Sham Fight at Scarva hold a special place in the parading calendar, and I believe people will want to mark this summer as a time to enjoy the freedom from the restrictions brought about due to the pandemic.

“The Sham Fight is a truly wonderful family occasion, and we are anticipating a fantastic turnout.

“As a Christian-based organisation, the religious service is extremely important to our members. The procession to the field, through thousands of people lining the village streets, is a unique spectacle of music and pageantry.”

Rev Anderson commended the organising committee – from Scarva’s RBP 1000 – “for their dedication, commitment and professionalism in maintaining the only re-enactment of its kind on these islands”.

Next Wednesday, the procession will leave the assembly field at 11:15am and proceed through the village to the demesne. Earlier in the day, members of RBP 1000 will lay a wreath at the village memorial to local members of the security forces who were murdered during the Troubles.

The Sham Fight will take place at 1:30pm, before the religious service, which is scheduled to start at 2pm. Platform proceedings will be chaired by the Worshipful Master of RBP 1000, Andrew Boyce, with praise led by Poyntzpass Silver Band.

The return parade is scheduled to leave the demesne at 3pm.

The return of the Scarva Sham Fight is expected to bring business to local traders, with the parade route lined with stalls, ice-cream vans and catering facilities. It is also said that the event could be harnessed to boost the prospects for tourism in the area.

In March, at a meeting of Armagh, Banbridge and Craigavon Borough Council, Councillor Darryn Causby said that more could be done to boost the tourist potential for the borough.

“We also have what is probably the largest one day festival in the entire continent of Europe on the Thirteenth of July at Scarva yet we have not considered how we can use and leverage it to enhance the tourism and events prospect we have across the borough,” he said.