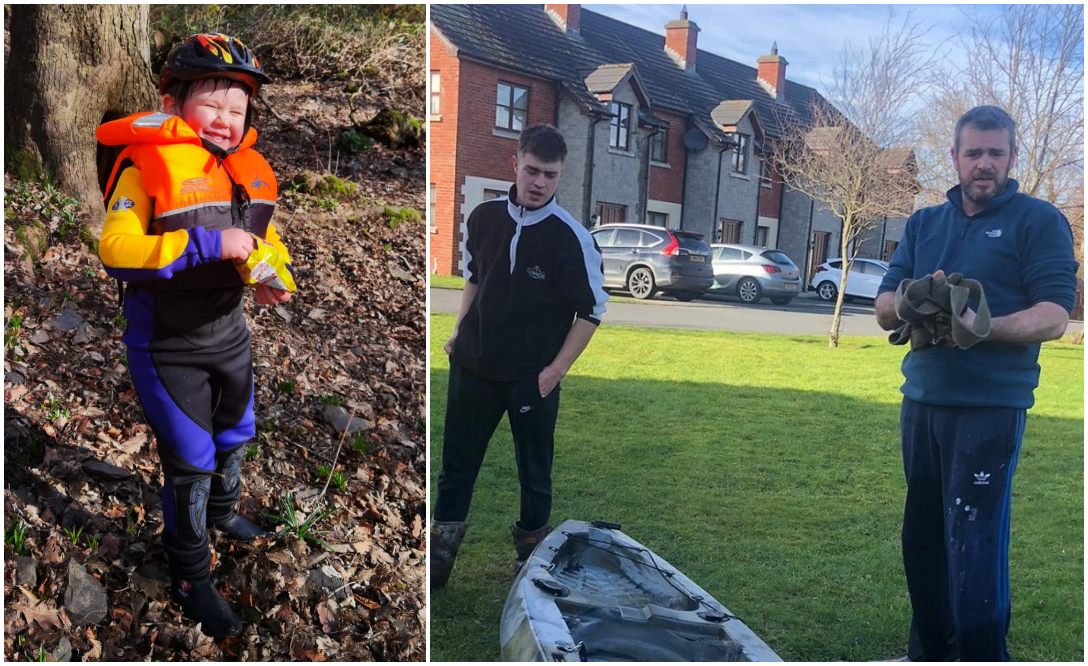 Little Sean Steritt, 7, was rescued from the Cusher River by Zac and his dad Mike Greer on Sunday

A grateful Co Armagh mum says she will be forever indebted to the father and son who risked their lives to pull her stricken seven-year-old boy from the Cusher River in Tandragee on Sunday.

Elaine Sterritt, from Mullavilly, says her son Seán – battling the numbing water and a ferocious current – was just moments away from losing his grip on an overturned kayak when heroes Mike Greer and his 18-year-old son Zach came to the rescue.

Speaking to Armagh I, an emotional Elaine said she has no idea what she can offer the two men who saved her from suffering every mum’s worst nightmare.

“We don’t know what we can do to thank them; how can you put a price on somebody’s life,” she said. “What sort of gift can you give? It’s priceless what they have done. We just want to acknowledge that in whatever capacity we can, what they did for Sean, it was remarkable.”

Elaine explained how Seán was in the kayak with her partner on Sunday afternoon when the incident happened.

“They were coming along from Clare Glen, along the River Cusher, and that’s when they encountered a weir. The water, whatever way the current was, had spun them around and flipped them over.

“My partner got Sean up holding onto the overturned kayak and tried to push him away from the weir but it spun him out and Seán was left to hold onto the kayak for dear life.”

Fortunately, Seán has been well versed in water safety and was wearing the appropriate gear – a combination, Elaine said, made the difference between life and death.

She continued: “My partner was flung over to the other side of the river. He couldn’t get back in, he held on, scrambling to brambles and briars at the other side. He couldn’t have gone back in; he would have been swept away by the current in the water.

“He had a wet pouch with his phone in it, so he rang through to the emergency services and then shouted out for help. That’s when Mike and his son Zach responded, and went down the hill towards where Seán was.”

It was shortly after when Elaine, who was waiting nearby in a car with her one-year-old son, was notified of the drama unfolding. Unaware of the gravity of the situation, she made her way towards Tandragee.

“I went on ahead to the Mullahead Road – I was due to meet them there at the end. I don’t know what it was but I had walked up the Bann a bit before hand, along the towpath, but something made me stop and stay down around the car.

“I then got the phone call to tell me Seán was in the water. I just ran to the car; I had my wee one-year-old son with me. I drove out the Mullahead Road again, and I was at the top of that road, coming into Tandragee, and the fire brigade passed me with the lights on. I just burst out crying, ‘that’s my child’, I thought.

“I didn’t know the real extent of the incident until I arrived in Glebe Hill Manor and I saw the emergency services there. I was just taken aback – the Air Ambulance had landed too.”

Elaine, who along with being 23 weeks pregnant, was going through hell in her mind at this stage.

“I literally ran down and a police officer stopped me; I told him ‘this is my little boy, where is he, where is he?’ As I got down to the front of a neighbour’s house, they were lifting him out; they had him stripped off, in blankets and foil wrap.

“I just hugged him and told him to listen to the emergency responders.”

Elaine says the emergency services were phenomenal in their response and approach to the whole situation, but she reserved special praise for Mike and Zach Greer, whom police said will be nominated for a bravery award as a result of their selfless and heroic actions.

“We cannot thank Mike and Zach enough; I was speaking with the police this morning and they consulted with the fire chief who said if it wasn’t for the quick response of Mike and Zach, we could have been dealing with an altogether different story today.

“They didn’t know how much longer Seán would have been able to hold on for. It was split seconds between life and death.”

Seán suffered a number of nasty knocks, including a perforated ear drum, but it was his instinct which Elaine says she is so proud of.

She continued: “When you’re in a situation like that, it’s fight or flight, and something inside registered with him and he held on and he did not let it go.

“The protective clothing he had on saved him too. It just goes to show you cannot go into these situations willy-nilly. They had the information; they knew what to do in the event of an emergency. If this had have been somebody who didn’t have as much knowledge it could have been a very different story.” As for the people of Glebe Hill Manor, Elaine couldn’t speak highly enough of them.

“People respond at a time of crisis, a community does come together and even though they didn’t know us, they opened their doors and welcomed a child who was in dire straits.

“That man and son went down with several straps to get him out of the water. They walked him along the bank, got him out, carried him up the bank and into this house. It’s amazing; testament to that community. There is humanity, love and gratitude still out there.

“It’s a difficult time for everyone but this shows the good in people – in communities. We are indebted to them forever. It is priceless what they have given us. They put themselves at risk. It’s profound what they have done.”

While Elaine says she’s still an emotional wreck, Seán on the other hard is “as resilient as ever”, and just got himself up this morning and continued life as normal.

While the actions of the two heroes were lauded by an indebted mother, Mike Greer, also speaking to Armagh I, explained how a  calm approach prevented tragedy.

The 41-year-old recalled: “I was in the garage just after 12 o’clock or so, tidying up.

“I headed up the stairs; we live in a three storey so you can see the river when it is high over the retaining wall from the kitchen.

“My daughter Bethany (15), was in the kitchen and said to me that she could hear a man shouting from the bank.

“I looked out the window and this man was waving at me, so I went upstairs to the top bedroom and swung the window open.

“I shouted out to see what was wrong and he shouted back that his son was stuck in the water up against the wall, though I couldn’t really hear him that well. “I heard him shout about a ladder and I was thinking, ‘I’ve no ladder here, they are at my dad’s house’, but with the height of the wall and the flow of the river they would just wash away.

“So I went back down the garage, opened the store up, took a ratchet tie strap that haulage men would use and one from the boot of the car. I then ran through the neighbour’s garden at the very end. He has a bit of decking thankfully built against the wall, so I was able to hop up on top of the wall.

“I shuffled along it until I was level with the wee guy, I dropped the strap in and shouted at him to grab it.

“He grabbed it with one hand and he was sort of bobbing about. I shouted for him to grab it with his other hand. He tried but he kept putting the hand back onto the kayak.

“It was caught it sort of a whirlpool, he was spinning round and being flipped. I just remember thinking this is not going to end well.

“After about five minutes my son appeared; he took the other strap which was on the wall and fed it down to him.

“With a bit of encouragement and shouting, he put his other hand on the strap and we were able to sort of pull him out of it and we worked him along the wall.

“I said to my son ‘just watch if he takes down the river hard, just brace yourself’. “We got him a bit down the wall, then I said to my son to continue on and I would go down the other end and jump in.

“By that stage there were a few people about, I can’t remember clearly but my goal was to get over the fence, down the bank and into the river to get to him.

“I was into my waist as I waded over to him; he was against the wall where there are a few stones and it is a bit more shallow.

“I lifted him up and carried him; meanwhile his daddy was on the other side, he was just overwhelmed, he was just in a real state of shock.”

Mike said it was only then he himself had started to realise what has happened.

He continued: “So I carried him up until my son was level with me and he could lift him up off the bank and I was able to get out of the river.

“The ambulance then took him off us and got him warmed up in another neighbour’s house.

“I then shouted over to the father to head to a bungalow in the field up above and I drove around and got him.

“Thankfully, it was a happy ending. It could have been a different story today.” Mike said that no matter what situation he faces, he tries to approach it the same way – level headed and calm, because “people panic, they try their best then do something silly and end up making the thing worse”.

“I am not saying that things couldn’t have gone wrong for me yesterday, but if you panic in any situation you are beat, I have always said that.”

Mike praised the actions of his son Zach whom he said was a reassuring presence beside him. His daughter Bethany called 999 after initially spotting the man on the river bank.

“Zach was a great help, even if I had got the child to grab the rope with both hands, it was reassuring to have someone else there,” he added.

Mike and Zach weren’t done with their heroics, even managing to rescue the kayak itself afterwards. “I got a second soaking, it is lying the garage now. The father and son are calling round tomorrow to have a chat. The wee fella is fairly keen to meet the people that helped him.

“I am just thankful it ended the way it did, because there were enough tragedies in the Tandragee/Portadown area at the weekend.”