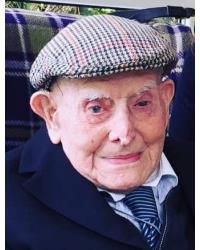 The funeral will take place on Monday of one of Northern Ireland’s oldest and most respected residents, Tandragee man William Duffy.

Known to all as Billy, he sadly passed away on Friday.

Mr Duffy would have celebrated his 106th birthday in less than three weeks time.

He had been a hugely popular and familiar figure in the town of Tandragee for well over 90 years.

He often sat at the door of his home at Church Street over those years and had a friendly word and yarn for those passing by.

Mr Duffy was born in Greenwich in the United States of America on April 22, 1913.

His parents were originally from Co Armagh and had emigrated.

But a young Billy came to Northern Ireland, then with two siblings, when his father returned home after the tragic loss of his wife in a tram accident. Billy was only eight years of age when his mother died. His father later remarried.

Mr Duffy had five brothers and sisters – the late Sadie, Malachy, Maureen and Maurice – and Margaret, the last surviving sibling.

The affable Tandragee man made headlines on his 100th birthday in 2013 after it emerged that there was no formal recognition for the occasion from HM The Queen, the Irish President or from his native America. He received nothing from the latter because he did not live there and nothing from the UK or Ireland because he was not born here!

Over the years, Mr Duffy had a number of jobs but it was as a dairy farmer where he found his calling.

People in Tandragee will recall him walking cattle through the town, taking them for milking, in days gone by.

Mr Duffy remained active throughout his life. He only retired from farming when he was 80 years of age.

He was married to Dolores – or Doris as she was known – whom he met at a church disco.

They had many happy years together and the couple had eight children – Monica, Déirdre, Líam, Bláthnaid, Oísin, Gráinne, Méabh and Bríd.

But sadly he was pre-deceased by his loving wife, when she passed away in December 2017 at the age of 84.

Like his late wife, Mr Duffy’s funeral will take place to St James’ Church in Tandragee, with 11am Requiem Mass.

He will be laid to rest afterwards at Ballinabeck Cemetry.

To the entire family circle, including his sister, children, grandchildren and great grandchildren, our deepest sympathy is extended at this very sad time. RIP.