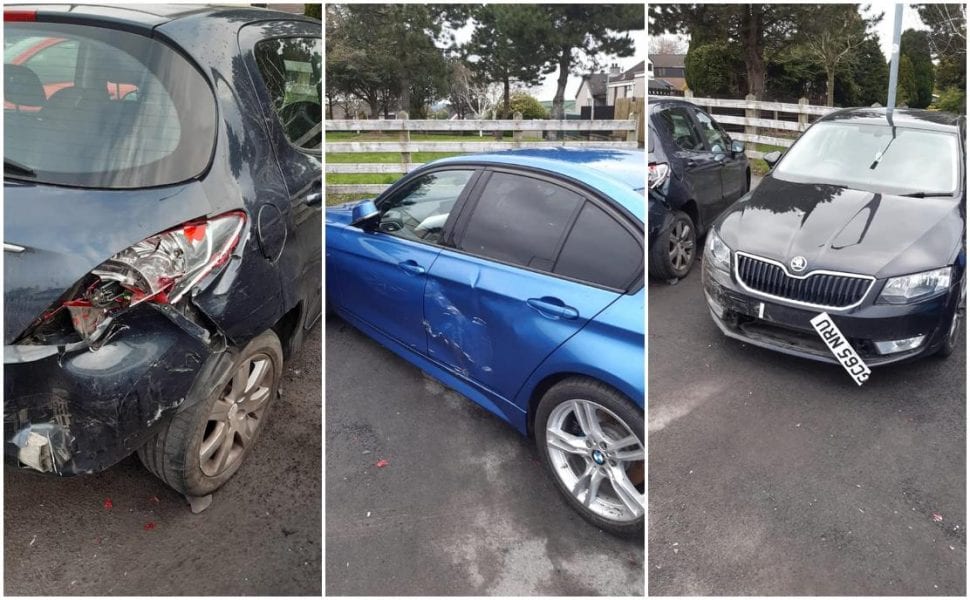 Residents in Tandragee awoke to find a number of cars badly damaged after a motorist went on a vandalism rampage in the early hours of Sunday morning.

Several cars were hit after a reckless driver ripped through the town centre at high speeds at around 2am.

The cars were parked at the corner of Cornmarket Street/Austin Drive.

One local resident, speaking to Armagh I on Sunday morning, said: “This is terrible; as if people haven’t enough to worry about. For all anybody knew these could have been key-worker cars providing vital services to the community – disgraceful.”

Speaking to Armagh I he commented: “I would first of all express my utter disgust at this despicable damage to cars in the Cornmarket Street / Austin Drive area of Tandragee on early Sunday morning.

“I know all the owners of these vehicles, in fact one was my cousin’s family car and understandably they are all shocked and disgusted at the considerable damage done to all the cars.

“These good folk have worked hard and it is really annoying that their cars have been damaged needlessly. In the early hours one of the residents heard a loud bang and when they looked out to the car parking area she could see that the cars had been pushed sideways, thankfully they acted quickly and contacted the PSNI.”

He added: “I would commend the PSNI as they apprehended the perpetrators soon after and now they are thankfully in custody and hopefully appear in court soon to face the penalty they deserve.

“It seems there was two cars involved and possibly racing each other, the drivers where not local to the area.

“At a time when people are worried about the whole implications of the COVID 19 the actions of these thugs showed just how disgusting they are causing so much damage to other people’s property and the distress they’ve caused to the owners and neighbourhood.”

Anyone with information should contact the police on 101 as soon as possible.