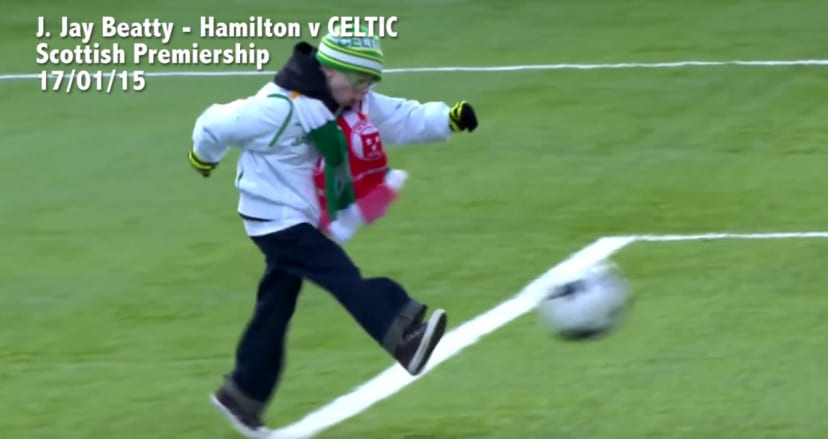 Celtic superfan Jay Beatty has scored again with his own celebratory T-shirt – and sales will raise money for a charity set up by his mum!

The 11-year-old Lurgan boy, who has Down’s Syndrome, delighted all when he was declared the runaway winner of January’s Scottish Premier Football League’s Goal of the Month.

And now his winning exploits will be immortalised – in cotton – as part of a fantastic fundraising initiative for the Down’s and Proud charity, established by mum Aine.

Jay’s dad Martin is thrilled with the new T-shirt, which is available to buy online. He describes it as “a T-shirt in honour of a very special Bhoy which shows what can be achieved if you believe”.

All profits are in aid of the Down’s and Proud charity.

It was set up in 2007 originally just through coffee morning at the Beatty family home in Lurgan but evolved into a very productive and successful support group. It is described on its website as a parent-led organisation, stating: “We want to make sure that the little bit of extra help our children may require is being provided for. We want to make sure the parents are happy and that they have adequate support and information to help with decisions they may face throughout their child’s education and beyond.

“We aim to provide support and a listening ear for those who want to share their thoughts and experiences. Down’s and Proud aims to raise awareness for Down’s Syndrome, as the more people are aware and educated about the condition, the easier it will be on our children.

“A huge aim of the group is to ensure our children grow up together and be friends.”

It is hoped the T-shirt will help raise money to support these aims.

Certainly it should prove popular as Jay certainly did when he made his little bit of history by winning the January Goal of the Month.

It was during a VIP visit that the Hoops’ mad lad got his moment in the spotlight at the mid-month clash between Celtic and Hamilton Accies.

Thanks to goals by Adam Matthews and Liam Henderson, Celtic were celebrating a 2-0 victory at New Douglas Park. But Hamilton later tweeted and allowed a goal scored by Jay during half-time to be counted, declaring the official result 3-0.

That put Jay alongside some of the biggest names in Scottish football for the ultimate accolade – and his own bit of history.

Celtic FC even used their official Facebook page to encourage people to cast their votes for the County Armagh youngster, which supporters did by posting comments under the official video on the SPFL’s Youtube channel.

And vote they did, with Jay’s unstinting popularity clear to be seen.

Now the public can enjoy Jay’s achievements by ordering special T-shirts, priced at £16, and support a very great cause.

Visit the link below to place your order: