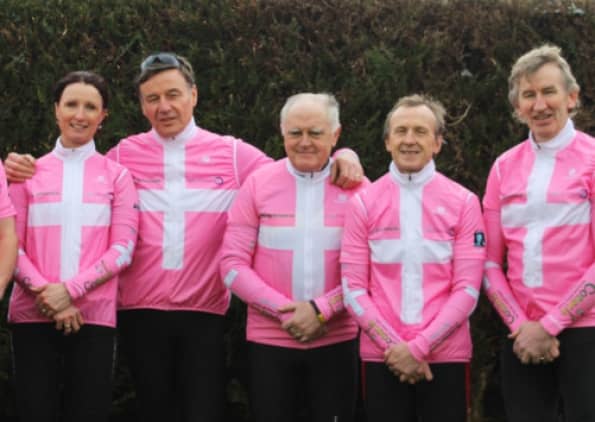 ARMAGH people are being asked to cheer on and support the Hardy Bucks 32 county cycle for suicide prevention charity Console as it passes through the county next week.

The Cork-based Hardy Bucks will be in Crossmaglen on Wednesday, May 8, as part of their 32-county marathon cycle to raise funds and awareness for the national suicide prevention and bereavement charity.

The 10 members of the Hardy Bucks cycling squad, in their distinctive pink shirts, are on the road for an eight-day, 1,100km odyssey, which will see them visit every county north and south.

“As a practicing GP I feel that men’s struggle to communicate on a meaningful level contributes to the prevalence of male suicide. I want to encourage men to connect more with their feminine side and that’s why we are wearing pink jerseys,” said Dr Michael Crotty, from Ballincollig.

“We hope our cycle will have a positive impact on the fight against suicide, which is all too prevalent in today’s society.

“We aim to help by raising Console’s profile and hopefully €15,000 in funds to assist Console in its valuable work.”

The squad, whose ages range from mid-40s to mid-60s, have been cycling the roads of Cork for the past 12 years.

A local farmer, impressed with their determination to continue cycling over Mullaghanish mountain through a torrential downpour, christened them the Hardy Bucks and the name stuck.

Their plan is to set off from Listowel this Saturday, May 4, and cycle an average of 110 to 170kms each day, on a route that will take them as far north as Crossmaglen in South Armagh and back to Cork by Saturday, May 11.

On the road with the crew will be van driver Kieran Field, who will be looking after their food, safety equipment and spare parts.

“As we travel through towns and villages on the way we will be collecting money for Console and spreading the message about its valuable work,” said Dr Crotty.

People can also contribute through the My Charity website, www.mycharity.ie/event/32countycyleforconsole

Console is a nationwide professional suicide prevention and bereavement charity which offers counselling services and 24-hour helpline support to people in crisis and those bereaved by suicide, Freephone 1800-201890.

The charity has full-time counselling centres in Cork, Dublin, Wexford, Limerick, Galway, Kerry and Mayo. It also offers services in Kildare, Athlone and other areas of Dublin such as Tallaght and Clondalkin and has recently opened a service in London.

Counselling, advice and general support is available for any individual, couples, groups, families or children who have been affected by suicide.

Console can be reached at any time on freephone 1800 201 890 and many resources and useful information can be found at www.console.ie