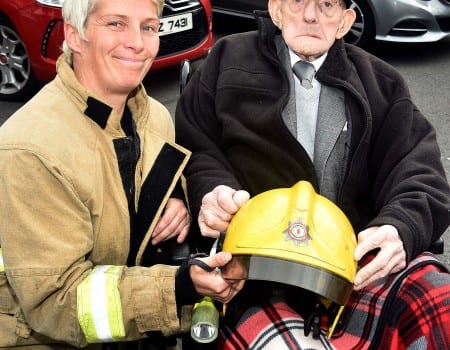 A former firefighter made a very special return visit to his old station as part of his 100th birthday celebrations.

Northern Ireland Fire & Rescue Service recently welcomed Thomas Hamilton to Portadown Fire Station and were delighted to do so!

Thomas, who started with the Wartime National Fire Service in 1943, completed his training in Belfast before moving to the newly-named Southern Area Fire Authority based in Portadown in 1947. Cycling 15 miles to work every day, Thomas was extremely dedicated to his role within the organisation.

He gave 27 years of dedicated service before retiring in 1970.

But as part of his milestone birthday, Thomas was intent on visiting Portadown Fire Station.

He was welcomed to Portadown Fire Station and took centre stage as guest of honour during a display highlighting the updated equipment used by today’s firefighters.

“Thomas talked to the current firefighters at the station and, while the equipment may have changed, the camaraderie within the Fire & Rescue Service remains as strong as ever.

“It was clear from those Firefighters attending how much they enjoyed Thomas’s stories when he carried out his distinguished service.”