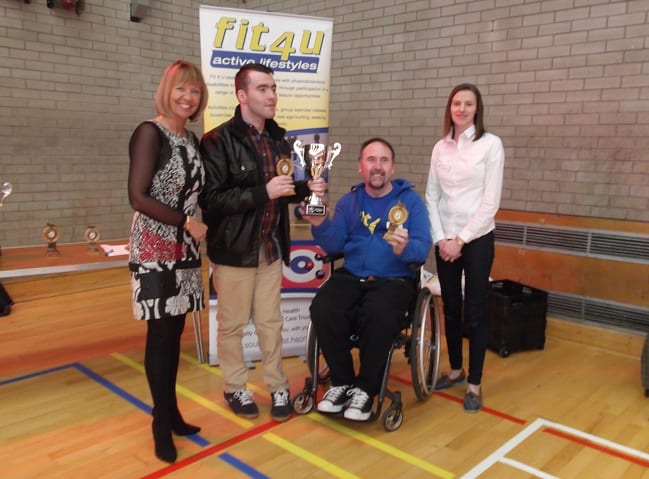 The Southern Health and Social Care Trust Fit 4 U programme recently supported a Boccia Tournament for people with disabilities from across the Trust area.

Boccia is a chair based version of bowling and was organised in partnership between the Southern Trust Fit 4 U Project and Armagh City, Banbridge and Craigavon Borough Council, Sport NI funded Active Communities coaches.

16 teams from across Armagh, Dungannon, Craigavon, Banbridge and Newry participated in the tournament held in Craigavon Leisure Centre. Following close competition in the league stages, the following teams emerged as award winners.

David Wylie, winning team, said “You never know how things will go. Every ball is another opportunity.” The awards were presented by Councillor Margaret Tinsley, member of Council’s Leisure and Community Services Committee, who congratulated participants and added

“Well done to everyone for their competitive spirit and to the overall winners, who played extremely well in the final to win.”

“It was great to welcome teams from across the Southern Area for some friendly competition. Our Active Communities Coaches work with many of the groups throughout the year and the participants enjoy putting their skills to practice in a tournament.”

“It is a sport that promotes co-ordination and control and a team sport that encourages communication and an opportunity for social interaction.”

For more information about Boccia in your local area contact Rhonda Richardson, Southern Trust on Tel: 028 3741 2129.

Pensioner receives £60,000 in damages after falling outside an Armagh chapel