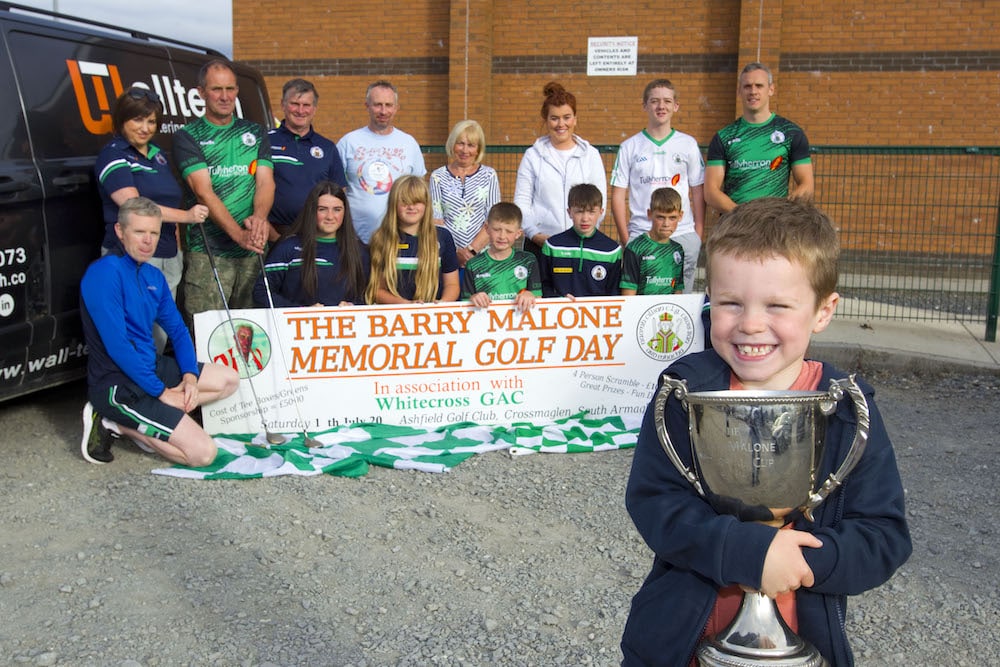 Ethan Malone, grandson of the late Barry Malone, holds the Barry Malone Memorial Cup along with Armagh’s Mark Shields pictured with members of the 12 underage teams, committee members and representatives of the Malone family

Game-time was limited this season, but the 33-year-old has made an impressive 103 appearances over 11 seasons, having missed much of 2021 after suffering a hamstring injury, which required surgery and an intense rehab programme.

He returned from injury to play in the big wins over Dublin and Tyrone in Division One of the National League and the St Killian’s Whitecross man also featured in the Championship.

“It was tough losing to Galway in the manner we did, but we showed that we are not too far away from where we want to be and I want to do my part to help the team build towards that next season,” said Shields.

There is no doubt that the versatile Shields has plenty to offer the relatively young Orchard squad on and off the pitch.

The attacking-wing back for county is likely feature at midfield for his club as Whitecross chase their first league win of the season ahead of an Intermediate championship against neighbours Shane O’Neill’s next month.

The St Killian’s Whitecross Barry Malone Golf Day will follow a four-man scramble format, with a cost of £120 per team.

Tee off slots are booking up fast, so get in touch ASAP to reserve your time.

Great prizes will be presented on the day.

Barry Malone was a committed St Killian’s club member and avid Armagh supporter, who died in an incident at work in 2012 and in 2013 Ashfield Golf course hosted the inaugural Barry Malone Memorial Golf Day. Armagh’s Mark Shields pictured with members of the 12 underage teams, committee members and representatives of the Malone family at the launch of the St Killian’s Whitecross Barry Malone Memorial Golf Class, which takes place at Ashfield Golf Club, Cullyhanna, on Saturday, August 6.