A change of perspective for Dromintee’s Mícheál: From leading the line for Armagh to frontline of mental health in Toronto 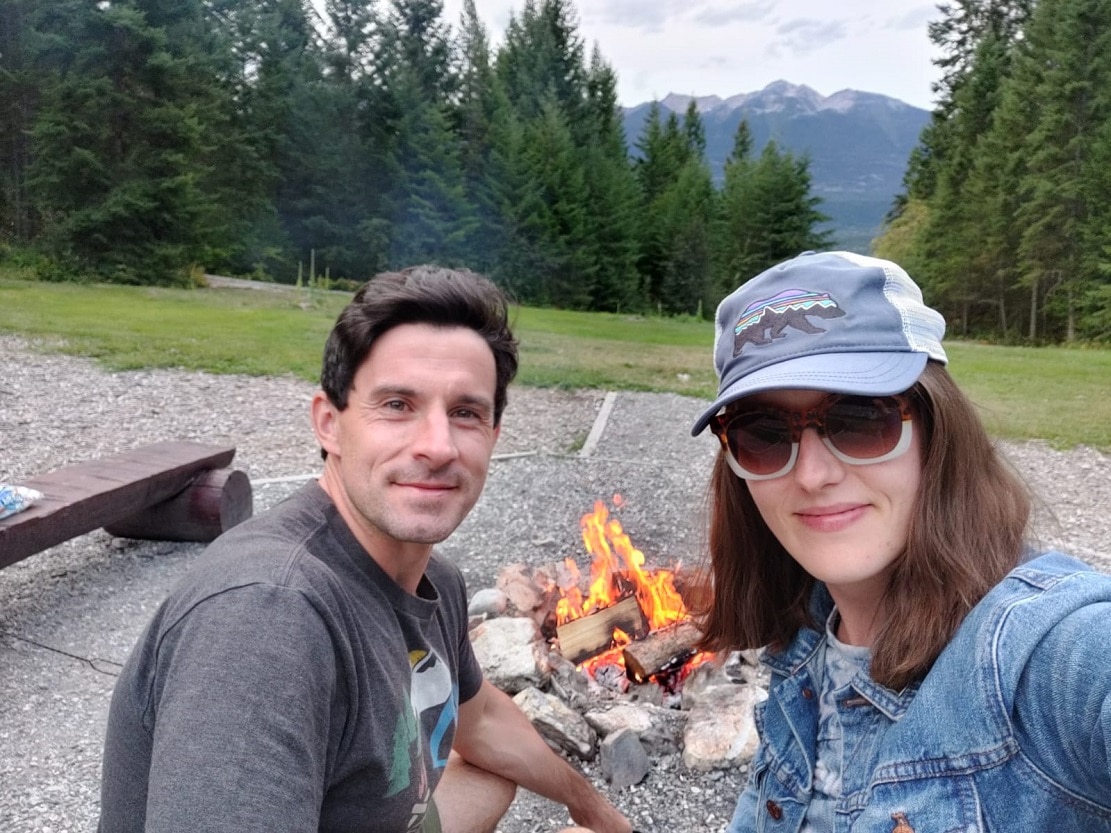 And it was no different in Dromintee – the O’Rourke name and a couple of All-Ireland winners’ medal is testament to that fact.

It’s also a name synonymous with Armagh GAA. Mícheál O’Rourke is the youngest of four footballing brothers – Aidan, Cathal and Martin all plied their trade with the Orchard county before him.

But while football was the focal point for Mícheál for many years, a long-standing hip injury, a sense of adventure and an opportunity to further his career helped lure the south Armagh native half way around the world in 2014 – he, along with his long-term partner, Leah McCullough, haven’t looked back since.

Armagh I caught up with Mícheál who now works as a mental health clinician on the frontline in Toronto, Canada.

Mícheál described his upbringing in Dromintee as one of “rural and classic Irish” with Gaelic football being the “centre of your universe”.

Mícheál later made the short trek to Newry, where he attended the Abbey Christian Brothers’ Grammar School.

“When I got to Newry, it just sort of made you realise how much bigger the world is than Dromintee and Jonesborough.”

Looking back, Mícheál joked how Newry was the “big smoke” until he got to Toronto – which really put into perspective.

It was whilst in Newry, that the young 16-year-old Mícheál met his now-partner, Leah McCullough; she was attending the nearby Sacred Heart Grammar School in the city.

“After that I went to Queen’s in Belfast to study Psychology,” he explained, “I was still football driven there, making friends from all across Ulster and Ireland.”

Following his studies, Mícheál found work closer to home, “30 minutes down the road” by his own estimation.

He said: “My first real work in psychology was in Castleblaney, Co. Monaghan, at a residential for adolescents with behavioural problems, that’s were I first got the bug for psychology and behavioural work.”

Thereafter, he found work with Newry based People First, working with younger people adults commenting: “The organisation is very education orientated, so it was a lot of work around careers.”

However, in 2014 the young couple decided to take the plunge, as many from this part of world do, and relocate.

Opening up on the move, Mícheál said there were a number of factors that prompted this decision, including career development and exploring the world.

“Up until the age of about 27 I did a lot of sport; then I had a hip injury, which I had an operation for, which left me out for about nine months.

“I tried to go back; my motivation for staying at home had been football but it was sort of a pivot, where you realise that it isn’t the centre of your universe anymore, just playing football.

“I just sort of thought there is much more opportunities out there, I wanted to advance my career.”

So it was that in June of that year, Mícheál and his partner Leah landed in the capital city of the Canadian province of Ontario.

“A huge factor for coming to Canada, not Australia or America, was that Leah, my partner, is a Canadian citizen,” he said.

“Her parents lived here in the last 70’s and 80’s, Leah would have lived there as a toddler. So when making to decision to move we kind of landed on Canada and thought we would move out and see how it worked out.”

Another strong pulling power which Canada had was that, according to Mícheál, as a nation, it is at the forefront of research with regards to mental health.

“It was not just because of Leah’s connection to the country, the healthcare system is world renowned, it is universal so you can access it for free with certain avenues and channels through which you can get mental health care.

“There are huge research centres which are at the forefront of medical research. The hospital I work for is the Universal Health Network which is the largest network in Canada, with 16,000 employees, it’s like a small town.”

After initially coming to Toronto on a two year visa, it is now seven years on and Mícheál is now a permanent resident.

“We settled in very quickly, there are a lot of Irish here; there is a lot of Scottish, a lot of British. Canada has a fascinating history with colonialism and so peoples’ heritage go back to a lot of those countries.

“The interesting thing about the Irish is that you don’t have pockets, like with Little Italy or Chinatown, we are space out across the country but you know we are there.”

Mícheál joked: “Like if you go to the eastern part of Canada, to Newfoundland and Labrador, it is like you are speaking to someone from Donegal, like their accent.”

Also unsurprisingly with people from the diaspora of this island, Mícheál ran into some relatives in Toronto.

He continued: “From my mum’s side, the O’Hanlon’s from Mullaghbawn, there is Jacinta O’Hanlon who is a psychiatrist and she has been out here since the 70’s.

“She was very supportive and welcoming from the start; being someone who understood south Armagh and Toronto. I knew she was out there because my mum would have talked about her, but it was not a factor in moving.”

Mícheál also arrived to find that no matter how far he travelled, GAA was bound to follow.

“There is a big GAA community; I was a bit surprised but it is like Boston or New York. Jacinta forced me to play for her GAA team, there was another team I was going to play for but she insisted on St Mike’s.

“She was quite smart knowing that she could help me with some advice but I could also help her by playing for her club.

“I played for a few years, but the commitment was not what I wanted anymore, I came to get away football and I just didn’t have the stomach for training three days a week.”

Speaking about life in Toronto, Mícheál admitted that the cost of living, especially for accommodation, was up there with some of the top cities in the world.

“If you came to Toronto and bought a coffee, you would probably raise an eyebrow, but the quality of life is good too, you are living in a big city that has good transport and until Covid came along a good social life.

“There are so many things on your doorstep; Canada is a fascinating country, it is the second biggest country in the world. You can jump in an airplane go to the other side and get lost in the Rocky Mountains.”

Looking at what is now his career, Mícheál said that he always pictured himself going into sports psychology, or moving into sport in some capacity, but he regretted nothing.

“I never really thought I would find something that would motivate me outside of sport, growing up if it wasn’t GAA it was Manchester United or watching rugby, anything that was going really.”

However, when he arrived in Toronto, Mícheál’s first job was as a community worker, on the streets helping the homeless and those living a transient lifestyle.

“Toronto is a big city, there are a lot of poor, a lot of homeless on the street using drugs. There are addiction issues, mental health issues and I really found empathy for that population group,” he said.

Speaking in the wake of the current pandemic, Mícheál said mental health was a crisis before Covid, that it “was always a huge issue that was never been properly addressed by governments, and still hasn’t”.

He added: “There are many reasons for that, talking about feelings and emotions there are a lot of stigmas and a lot of barriers exist, especially with certain groups such as men.”

Measures such as social distancing and isolation have only made mental health issues more severe.

“They are hugely protective factors, that you can actually go to talk with you friend, or to go to a restaurant and be in large groups, it really has highlighted the importance of those connections.

“Covid is something very unique in our lifetime, it is like a bookmark in your memory and we will always remember 2020-2021.”

According to Mícheál, the pandemic has brought “uncertainty”, “unpredictability”  and “unknown” which he described as a “storm for anxiety problems for a lot of people”.

“It is going to take a lot of work, not just from governments or hospitals or mental health organisations, but as a community, we need to do better.”

Alongside this, Mícheál said that mental health professionals have also seen a rise in addiction issues.

“We are seeing a lot of people, especially men, struggling with alcohol problems because of Covid. People have been cornered overnight, they are reaching for the bottle as an escape, something to help them cope in hard times.”

He described the pandemic experience for those in his profession as “strange”.

“When it came, our world as mental health professionals changed quite quickly overnight,” he said, “it was all hands on deck to support Covid.

“We were redeployed screening at doors, Covid assessment centres and testing at long term care homes for about six months or so.”

A year on and Mícheál  said that those in the mental health sector are beginning to see an increase in their volume of work.

“It is all done by Zoom now, we are open to the world but for us body language is very important as it helps understand the symptoms people are presenting.

“It has been a huge adjustment, there are a lot of positives for example people do not have to take time off work and there is research showing that it has been effective.”

Looking ahead, Mícheál said that he does plan on returning to visit family once the all clear is given, having not been home since 2019.

“We had planned and had flights booked to go back at Christmas but it just didn’t make sense. We would have had to quarantine when we got over for two weeks and the same when he got back.

“Leah got over back in July, when it is was quieter with cases. She works from home as opposed to me working in a hospital and having to go in everyday.

“I am glad she got over, we just knew coming into the winter, with the projections and what the health professionals were saying, that it was going to be pretty hard to travel.”