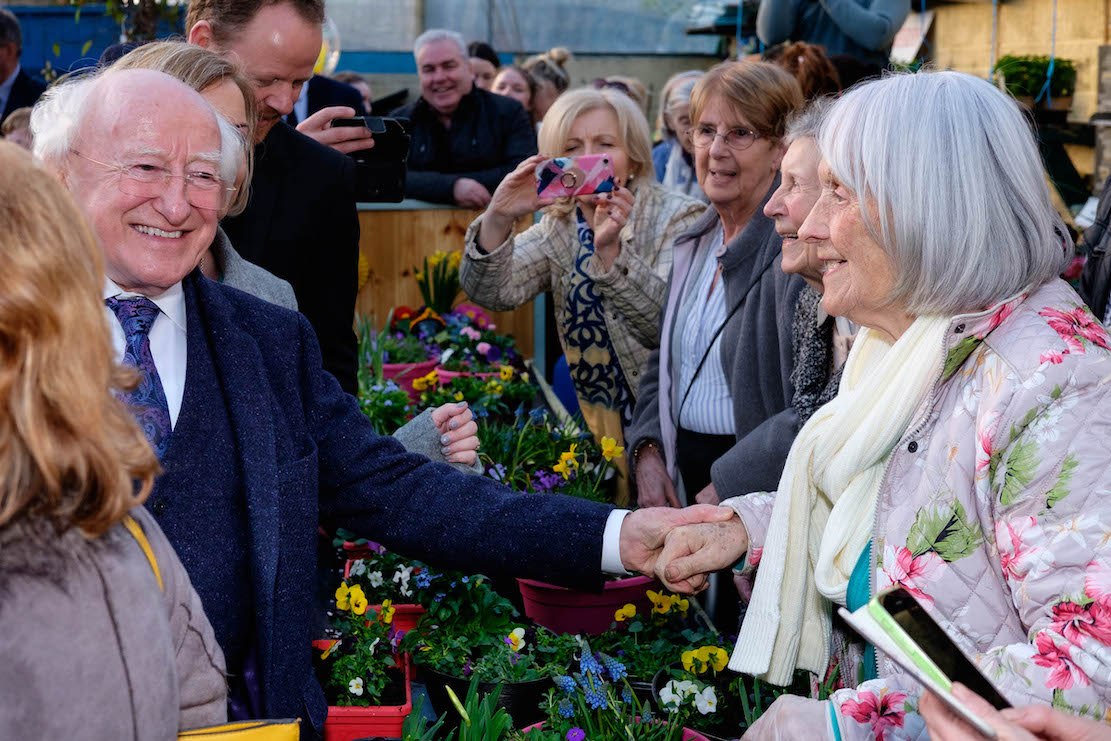 Irish President Michael D. Higgins and his wife Sabina Higgins paid a visit to An Tobar Community Wellness Centre and Social Farm in Silverbridge on Thursday.

There was a festive atmosphere as around 120 invited guests gathered for the President’s arrival at around 5pm. A guard of honour was provided by pupils of St Joseph’s High School Crossmaglen.

Earlier the President and his wife had attended the opening of a new school in Dungannon, Co Tyrone, before dining in popular Armagh restaurant Uluru.

The President was invited to south Armagh by Una Walsh, as part of the International Women’s Day celebrations.

An Tobar, which is a new social enterprise based at Finnegan’s Nursery & Garden Centre, Silverbridge was the chosen venue for the visit as the President is a passionate environmentalist and advocate of community development and social inclusion.

The Presidential party was welcomed by Una Walsh and Kathleen Finnegan. Despite the pouring rain President Higgins took the time to shake hands with each of the pupils in the guard of honour before proceeding indoors.

Guests included many of the social farming and social and therapeutic horticulture participants who attend services at An Tobar CIC, as well as the An Tobar Team, the Finnegan family and some of their friends and neighbours.

Mrs Walsh expertly entralled the visitors with a brief account of the rich heritage and history of Silverbridge and the surrounding Slieve Gullion and South Armagh area, while the local crowd looked on proudly.

Ms Finnegan continued by welcoming the Presidential party on behalf of the Finnegan family and the An Tobar team on what was she declared a ‘proud and historical day for Silverbridge and south Armagh.

She also thanked Mrs Walsh for all her dedication and hard work in the community and for organising such a prestigius event.

Ms Finnegan described how she and her sister Margaret’s desire to ‘give back to the community’ had led to them setting up An Tobar CIC in April 2018, having spent almost 30 years in the retail garden centre business.

“People for years have been telling us how therapeutic it is here and how being here made them feel good,” she said.

“When we opened Libby’s Tearoom in 2015 we were pleasantly surprised to find that it quickly became a real social hub for the local community. We began to see the place through other people’s eyes and we realised that here was a wonderful opportunity to give back to the community.

“And so here we are now, living that dream and making it a reality. The name An Tobar means the well or wellspring and comes from a well on the farm which was locally regarded as a healing well.

“The name reflects our aim which is to improve the health and wellbeing of the community. Our aim is for people to feel connected and included, tell their stories and build communities.”

She continued: “Our social and community events aim to bring people of all ages and abilities together. We believe that every individual should be treated with respect and feel included.

“I could quote statistic after statistic about deprivation in this area, about health inequalities and lack of access to services in South Armagh. But instead I want to focus on today as a day of celebration, to acknowledge all of our participants, to celebrate their individuality and uniqueness and the joy they bring to An Tobar every day.

“I can honestly say that it is both a privilege and a pleasure to come to work alongside these people every day. The President and Mrs Higgins will have the opportunity to meet all our participants and see their work.

“Let me describe the working week here at An Tobar. Mondays and Wednesdays are social farming days. We have six adults over the two days who come to experience a working day on a real working farm. This provision will be increased to three days per week from next month.

“Thank you to Aoibeann Walsh of Rural Support NI and the Southern Health & Social Care Trust for this contract. Thursdays and Fridays are community gardening days where we work with groups of adults and children.

“Saturdays are for the Kids Gardeing & Cookery Club with children from 2-11 years old, some of whom are also here today.

“In between all of this we work on educational gardening projects with around 500 children from 11 local schools. We provide social and therapeutic horticulture to elderly people (many of who have dementia) in Care Homes in Warrenpoint, Dundalk and Crossmaglen.

“We also run adult gardening classes, mindfulness and social events. It is scientifically proven that working with plants or animals brings about positive changes in people’s lives, including improved physical and mental health. Social and therapeutic horticulture uses the garden as a safe environment where the individual can develop his or her ability to socialise, make friends, gain practical skills, leading to greater independence and self- reliance

“At An Tobar the garden offer the peace and tranquility needed for rehabilitation and recovery. People feel better just from being outside and in touch with nature.

“This idea of our attraction to nature or the ‘biophilia effect’ was developed by Harvard Professor Edward O Wilson. He believed that as human beings this attraction is in our genes and more recent studies reveal that our physical health actually depends upon the influences of nature.

“This was something that was inherently known by our ancestors, something which we as a modern society have perhaps lost.
This disconnect with nature is detrimental to our physical and mental health and also places our global environment in jeopardy.

“A Uachtarian, we share the values you have espoused for your second term as President. We also applaud you for the work you have done over the last fifty years for community and environment. I have borrowed some of your own words, if I may? We need new models and innovative thinking based on deeper and better connections between economy, society, ecology and culture.

“At An Tobar we hope to emulate the values you promote, the principles of ‘equality, participation, inclusion, imagination, creativity and sustainability.

“We are proud to be a tiny part of the global social enterprise movement. Social enterprises are businesses that are changing the world for the better, reinvesting their profits or surpluses, to create positive social change. I would like to extend special thanks to Mr Stephen McClelland of the Newry & Mourne Co-operative and Enterprise Agency for his invaluable help, advice and mentoring over the last year , as he helped our An Tobar dream become a reality.

“I would also like to tell you a little about our latest project, the creation of an extensive native woodland on six hectares of our farmland, comprising of almost 13,000 native trees. This forestry expansion scheme is funded by DAERA and will be planted by Carolyn Trimble and her team from Indiwoods Ltd. Thanks also to the Woodland Trust who have also contributed to the
project.

The Woodland is to be named Brian’s Wood after my mother’s two brother’s who died in infancy. We feel that it is fitting to remember their short lives and of all of those who have gone before us as well as leaving a legacy for future generations. Northern Ireland is the least wooded region in Europe.

“It is said that at one time the red squirrel, now an endangered species, could travel from Glassdrummond Wood, four miles south-west of here all the way to Slieve Gullion without touching the ground.

“In our small way we hope to restore some of this natural environment, creating much needed natural habitats as well as providing a valuable community space and tourist destination.

“As I have said, today is a celebration of our participants and they are the heroes of the An Tobar story.

“Yesterday I received a lovely letter from Shane Lyddy, owner of the Glencarron Nursing Home, Crossmaglen about one of their residents who comes to An Tobar every week and the huge difference this experience has made to him, and the positive effect on his life, his mood and social skills.”

President Higgins then gave an enthusiastic impromptu speech in Irish and in English expressing his pleasure at being in Silverbridge and praising the work of An Tobar.

He described his passionate interests in biodiversity and the environment as well as community development.

The President and Mrs Higgins were given a tour of the courtyard, polytunnels and community gardens and spent time chatting to the participants and observing their work.

The children and older people were excited to show off the colourful spring containers they were planting up for sale. All proceeds from plant sales and tearoom sales are reinvested to fund community projects.

In one of the polytunnels the pupils from St Joseph’s enthusiastically showed the President and Mrs Higgins the raised beds they had built themselves, filled with soil and begun spring planting of vegetables and herbs.

The social farming participants gave a demonstration of their skills with the log-splitting machine much to the delight of the President and his wife.

President Higgins and Mrs Higgins concluded their historic tour with a tree planting ceremony. They each planted a young native tree, (a rowan and an oak) which will take pride of place as the first two trees in Brian’s Wood.

During the planting the audience were delighted by a beautiful rendition of traditional music which duly impressed President Higgins as he remarked upon the excellent playing of the violin by Mrs Bernie Muckian.

Afterwards, the couple retired to Libby’s Tearoom where Louise O’ Rourke, Marie Mooney and all the staff had laid on a delicious afternoon tea. Over a well-earned cup of tea the Presidential party were once again treated to some beautiful music with singers Colleen Savage, Blaithin McCann accompanied by Brendan O’ Sullivan.

A presentation was made to the President and Mrs Higgins by local artist Sharon Donnelly Carragher, a beautiful ceramic work depicting the majestic Ring of Gullion and Ballykeel Dolmen. Sharon and woodturner husband Padraig Carragher , who are proprietors of Bluebell Lane Glamping are part of ROGHA, a local group of talented artists and craftspeople.

Rosie also presented a lace brooch to Una Walsh as a token of apprecition from An Tobar for her efforts in organising the Presidential visit.

After tea the visitors mingled once more with audience and posed for photographs.

The crowd cheered and applauded as the couple waved goodbye from their departing car.

The garden centre and tearooms at An Tobar are open Tuesday to Saturday from 10am to 4.30 pm and are run as part of the overall not-for-profit social enterprise, with all profits re-invested in community programmes.

An Tobar CIC offers a neutral venue without affiliation to politics or religion, providing community services for people of all ages and abilities . These include a range of community activities, classes , social and cultural events to promote community health and wellbeing.