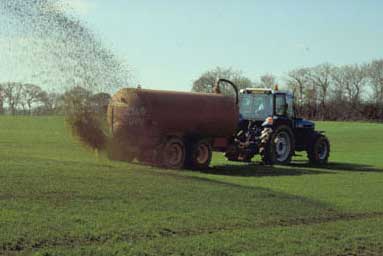 THE Ulster Farmers’ Union has welcomed a decision to allow farmers to spread slurry beyond the usual deadline.

The Nitrates Action Programme 15 October cut-off is to protect water from pollution caused by agriculture.

The UFU said 2012’s wet weather and ground conditions means some farmers have been unable to spread their slurry stores to prepare for winter.

The environment minister said farmers would need a “reasonable excuse” based on the condition of their lands.

Alex Attwood met with farming representatives to assess the impact of the bad summer weather on slurry spreading.

Following the meeting with the UFU and Northern Ireland Agricultural Producers Association (NIAPA) the Minister confirmed that last year’s policy would be carried over this year.

Minister Attwood said it was “crucial to understand that this will only apply to farmers who have reasonable excuse to spread after 15 October given the condition of their lands”.

“By making the announcement now, I hope it will work even better this year.”

The Department of the Environment advises farmers taking advantage of the opportunity to ensure they have a record showing they managed their livestock manures properly and show they had no alternative to spreading organic manures out-of-season.

UFU President Harry Sinclair said some farmers have been facing a “very difficult dilemma”. because of the persistent wet weather.

“The UFU has been in discussions with DARD and DOE, outlining the problem which farmers face,” he said.

“Farmers who genuinely will be unable to get their slurry out before the closed period starts now have the option of delaying their work until the weather and ground conditions improve.

“However, members must document the reasons why they delayed slurry spreading beyond the 15 October deadline as this may be required later.”

Mr Sinclair added that European Commission officials are concerned about the current rules in Northern Ireland, particularly spreading in February and have stated that they would be monitoring spreading practices and water quality data over the next four years.

“It is vital that local farmers act responsibly when spreading slurry to give the EC no excuse to strengthen the current rules.

“Brussels will be keeping a close eye on compliance with the closed period this year and may even demand extra storage across all farms in the future if we are continually struggling to comply.

“The industry cannot afford to have restrictions in February or additional storage requirements imposed and we must all act responsibly to avoid giving the European Commission any excuse to curtail our industry further.”