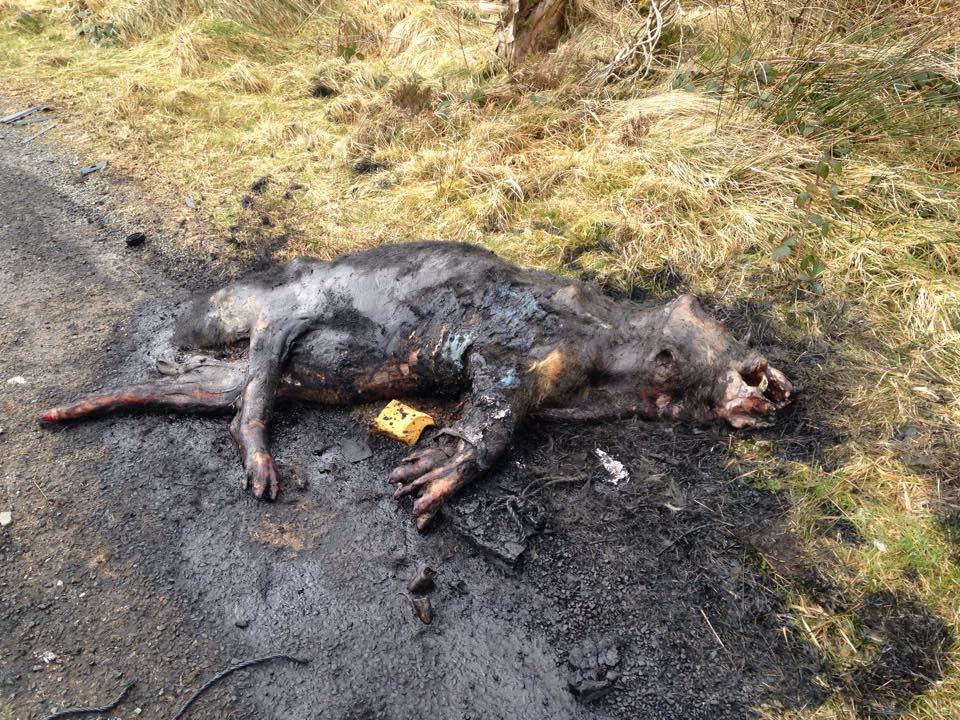 This is the sickening sight of a cow, grossly mutilated and set on fire close to a Co Armagh beauty spot.

The horrific discovery was made this week close to Carrickatuke by an Armagh I reader who took this picture. The remains of a cow lie charred close to Carrickatuke Viewpoint

Mystery surrounds how the animal died or came to be dumped at the side of the South Armagh road.

But it’s discovery has caused outrage in the local area.

The photographer who took this snap told Armagh I he felt “physically sick” when he stumbled upon the grotesque scene.

“The smell from the cow was just revolting and the stench met you long before you saw what was causing it,” he explained.

“I could feel my stomach churning over when I actually saw what was causing it.

“It was clear that the cow only had three legs – God only knows what happened it. It’s obvious it did not just die of natural causes and was left there to decompose.

“That would have been bad enough, but there was oil or petrol or something around the ground and the animal was all charred and twisted. Clearly someone had set it on fire – who knows, maybe it was diseased but surely this isn’t the way to do these things.

“I only hope that, at the very least, it was dead before someone put a match to it.

“It looks like it’s just been dumped on the side of the road, set on fire and then left there for all to see.

“I’m just glad I didn’t have the children with me. That’s a sight nobody wants to see as they drive along the road. My wee ones would be having nightmares and tell me, what do you say to them? How do you explain that to a four and six-year-old?

“I cannot get the sight and the smell out of my head – it’s absolutely sick and disgusting that something like this can happen.”

One local councillor, who lives in the area, said she will be demanding the authorities conduct a full investigation.

Councillor Sharon Haughey-Grimley told Armagh I: “It is absolutely shameful that anyone would degrade St Patrick’s Chair at Carrickatuke with dumping, especially in the run up to St Patrick’s Day when they know many people from near and far traditionally travel to the local beauty spot. “I am horrified at the latest dumping of carcases and that this has come just a few weeks since I had council officers out at this location cleaning up other farming waste.

“St Patrick’s Chair at Carrickatuke is a beautiful spot with panoramic views across Armagh and indeed on a good day views across Ulster.  It is something that local people are very proud of, and there is a strong tradition of people visiting the site and sitting on Patrick’s chair to make a wish, especially around 17th March.  It’s beauty and tranquillity being so remote makes it a very special spot.

“Those responsible for this dumping are completely irresponsible and are ruining our countryside and must be condemned in the strongest possible terms.  I have once again asked Council Officers to visit the site to clean up the area.  I have also asked that spot checks are done regularly in this area to discourage this type of dumping.”