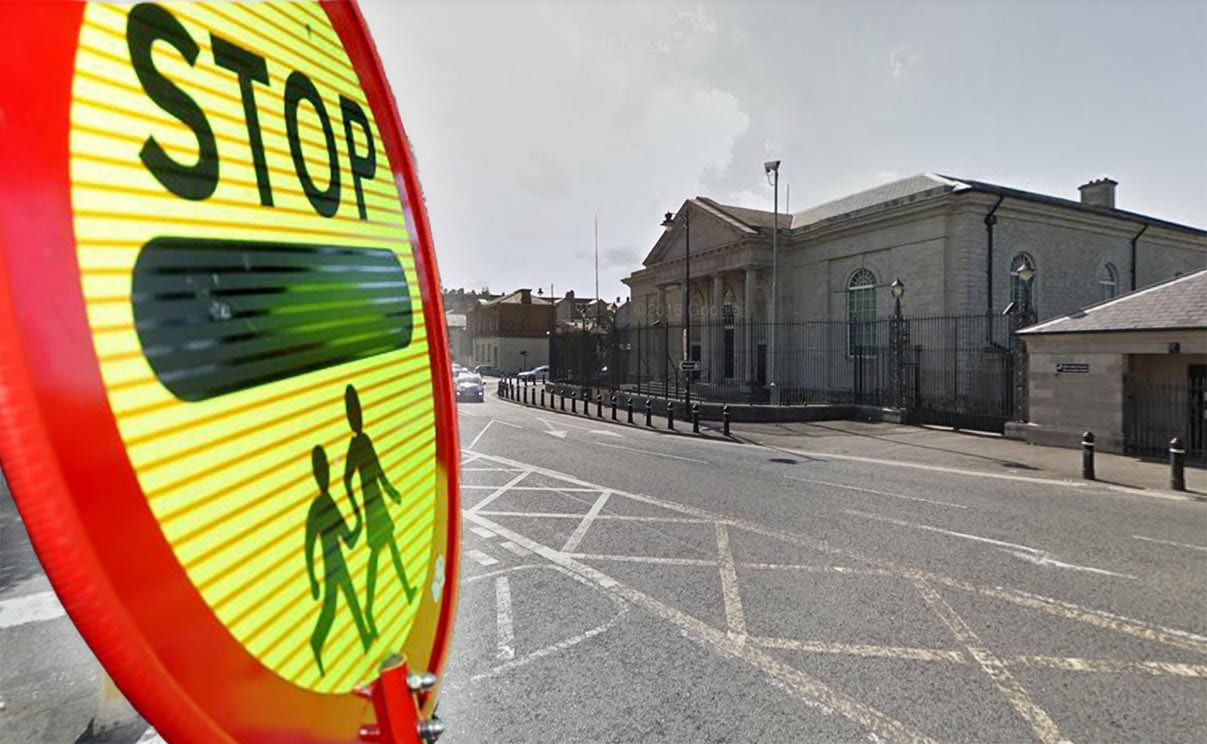 A reckless driver forced their way through a group of children and parents protesting over road safety outside an Armagh primary school this morning (Monday).

Concerned parents watched on in horror as the inconsiderate motorist dangerously sped through the children crossing at the city’s courthouse.

A group of around 30 schoolchildren and parents staged a mini-demonstration outside the courthouse following the Education Authority’s failure to replace a lollipop man on the Mall.

Armagh I first reported on the depth of feeling on the issue last week, and the situation escalated to today’s visible opposition to the Authority’s decision.

One parent, who witnessed the incident and did not want to be named, said it highlights the reason why there is a need for a manned crossing.

“We got the younger children across individually but some of the older children grouped together and went across the road,” they explained.

“The first child was taken across by a lady who had a disability and was using a walking stick. Now, as soon as she put her feet on the pavement at the other side a car just whizzed past, went straight through us.

“There was a crowd of children standing waiting to cross the road. If there was another child directly behind that one they would have been smacked by the car, no doubt about it.

“That issue itself highlights the exact reason parents are taking this action; it shows just how dangerous it is.

“One person standing in the middle of that road is not enough.”

An Education Authority spokesperson told Armagh I: “The Authority can confirm that the primary responsibility for ensuring children get to and from school safely rests with parents.

“We would urge all parents to continue to exercise great caution to ensure the safety of children on their journeys to and from school.”

But the parent said this response in itself raises further questions.

“Why has there been one for 30 years and all of a sudden it’s the parents’ responsibility?,” they asked. “Where was the parents responsibility for the last three decades? When I was a child going to school it was five lollipop people on the Mall.”

There have been questions raised over having a lollipop man at the traffic lights further up College Hill.

“For a start, that road is very fast and very dangerous; I’ve already had my car hit just sitting at the school gates,” explained the parent.

“The traffic lights on their own are not enough, the patrolman on his own is not enough, but unfortunately it takes both to control the traffic. So for the children, they still have to cross the road just to get to him, no matter where they’re coming from. It’s atrocious.

“Where the wee island is, in the middle of the road at the courthouse, it’s too close to the roundabout. It’s a blind spot for traffic coming from Lonsdale Road.”

The parents say they will continue to individually walk the children across indefinitely until there is an alternative and satisfactory resolution.

“It’s far too dangerous otherwise,” said one parent. “You just can’t have one person standing in the middle of the road and letting the children walk. Obviously, as we’ve witnessed this morning, that’s not going to work.

“This is not simply a protest, this is literally ensuring the safety of our own children. We are not going out of our way in any sense. This is essential.

“If you want to call it a protest, so be it, but this is just a case of getting children to school safely.”