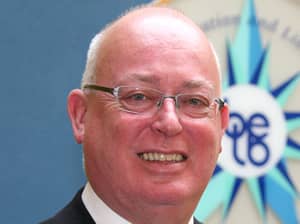 The new single body is due to come into force next year and will replace the five existing education and library boards in the Province.

At this moment in time, Armagh City and District Council is backing a campaign to have the headquarters of the new Education Authority – which will become the biggest employer in the Province – located in the city.

Mr Boyd is also a former chief executive of the CCEA and his new position will command a six figure salary.

The Education Authority will be established on April 1.

Mr Boyd’s appointment will take effect early in the new year, at a date to be agreed, following Royal Assent for the Education Bill.

The process to appoint the permanent chief executive will commence within a year of the Authority’s first board meeting.

Mr Boyd will oversee the transition from the existing five education and library boards to the new single Education Authority.

Welcoming the appointment of the interim chief executive, the Minister said: “Gavin Boyd has a wealth of experience within the education sector which will be crucial in taking forward the establishment of the Education Authority.

“His time spent as chief executive designate of the Education and Skills Authority will be invaluable in leading what will be a major change programme affecting the education and library boards and bringing stability to the Education Authority from the outset.”

Hailing the contribution of all involved in the boards, the Minister said: “I acknowledge the very significant contribution that the chief executives, board members and all of the staff, at all levels, in the education and library boards and wider education sector, have made over recent years in what has been a period of considerable uncertainty and flux.

“The passage of the Education Bill through the Assembly has now brought a significant level of clarity and the new arrangements around the establishment for the Education Authority, as they emerge, will add to this.

“I know that all involved in the education sector will look forward to making a continued and much valued contribution to the provision of the best possible education system for our children and young people.

“There will be challenges ahead, of that I have no doubt, but I have great faith in the professionalism of those who will be driving this important change forward and I look forward to working in partnership with them.”