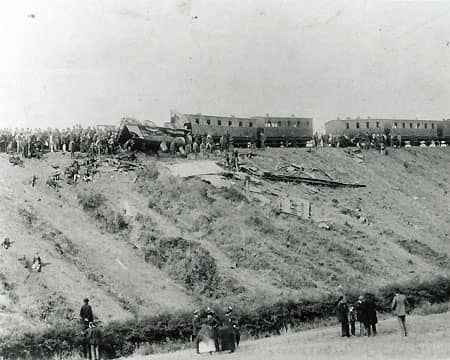 A new sculpture to commemorate all those who perished in the Armagh rail disaster is to be officially unveiled on its 125th anniversary.

As previously reported by Armagh I, the sculpture will be located in the grass area at the top end of the Mall beside the old Armagh Gaol.

It will be exactly 125 years to the day when a Sunday school excursion train, bound for a seaside trip at Warrenpoint, crashed just a few miles outside Armagh and killed 88 people.

The accident remains the worst ever rail disaster in Ireland and resulted in the Regulation of Railways Act 1889, which is accepted as the beginning of the modern era in UK rail safety.

However, the true significance of the disaster which took place that morning was the shocking loss of human life, and the tragic circumstances in which those lives were lost.

Speaking about the new memorial, Lord Mayor of Armagh, Councillor Robert Turner, said: “The sudden removal of 88 loved ones, young and old, tore the heart out of the Armagh community, then and for generations to come. The new sculpture is intended as a memorial and acknowledgement of that unforgettable day and the tragic human loss, especially the unrealised potential of the many young who died.”

The new sculpture is being created following a public commission that resulted in the appointment of Mayo-based artist Rory Breslin.

It will be a life-sized bronze figure of a girl mounted on a limestone plinth to be located in the Mall, Armagh. It will contain the names of all those who died as a result of the 1889 disaster.

Speaking about the commission, Godfrey McCartney, the council’s economic and community manager, said: “We are delighted to have found an artist of such quality to undertake the commission and the council are currently working with him to ensure the new sculpture is completed in time for the 125th anniversary on 12th June 2014.”