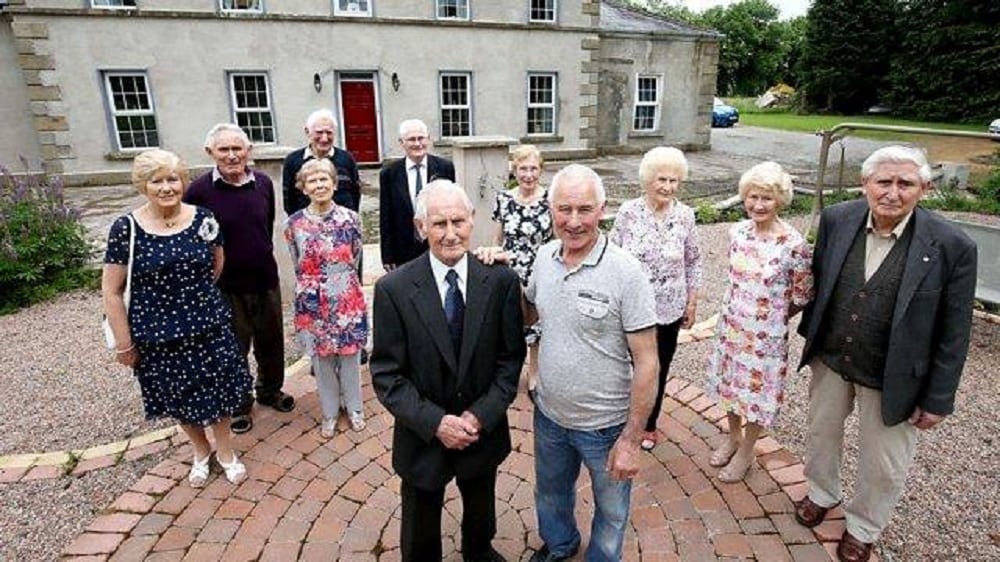 A County Armagh family came together at the weekend to celebrate a staggering World Record!

The Donnellys, from Collegelands, on the Armagh-Tyrone border, are the oldest group of siblings anywhere on Earth!

They were officially recognised as such in March.

And on Sunday, they gathered at their childhood home to celebrate the occasion.

It was a day, however, which was tinged with sadness too, owing to the fact that Austin – who had suggested they go forward for the Guinness World Record – sadly passed away in 2015.

In all, the Donnellys have a collective age of 1,073 years!

The family were the subject of a BBC One documentary ‘True North: The World’s Oldest Family’, which aired last October.

Narrated by Paul Muldoon, it followed the remaining 13 brothers and sisters after the passing of Austin as they aimed to write the family name into the Guinness Book of World Records.

Austin’s twin Leo took up the mantle to complete the family’s World Record attempt in his brother’s honour.

It was a crown they took in March and on Sunday they came together again to celebrate the occasion.

Leo, speaking to the Irish Independent, said it had been a difficult task getting everyone together but it was well worth it and a fitting tribute to his brother.

He said: “We lost Austin on Christmas Day in 2015  and after that there was even more of a determination to get ourselves verified and into that book, in his memory.

“After Austin died, it took a number of years off what we needed to make that record, but after 13 months we made it up again.

“It was a great day on Sunday, we came together from all over, Mairead came from Coventry and then some of us are in Dublin, Belfast, and then from all over Northern Ireland.

“It was an emotional day as well because Austin wasn’t there to celebrate with us. I could hardly make my little speech there was a lump in my throat.”

The True North documentary is now being updated and will be screened next month.

Following Leo’s efforts, the film weaves a stunning portrait of a family growing up in the most turbulent of times.

Incredible family archive helps to bring to life personal recollections and experiences. The Donnellys, in all their years, are the guides through a magical historical journey, with they themselves at the centre of it.

Sunday was a momentous day for them and one which will go down in history.