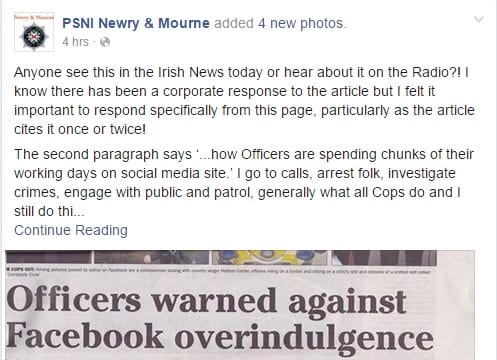 An Irish News article which suggested the PSNI ‘overindulge’ in social media has been met with widespread criticism following its publication yesterday.

The newspaper ran a lead article on page four of the paper headlined ‘Officers warned over Facebook overindulgence’, stating that it calculated the force to have spent an estimated 33 hours throughout December updating social media.

SDLP spokesman Alban Maginness is quoted in the piece saying: “It’s clear that some have been overindulging in Facebook posting particularly and I would urge caution that officer’s time is spent as effectively as possible dealing with crime and community safety.”

However, the PSNI, backed by a large majority of the public, has hit back condemning the article.

Newry and Mourne PSNI’s Facebook page, which was cited in the main article, responded with a lengthy retort last night.

The Irish News reported ‘how officers are spending chunks of their working days on social media site’ but that was rebuked by the Facebook page.

The statement said: “I go to calls, arrest folk, investigate crimes, engage with public and patrol, generally what all Cops do and I still do this while doing Social Media. I am not a desk pilot that dedicates my time to Social Media and I can assure you it does not take up chinks of my day, in fact a lot of the posting and replying to comments and messages is done in my own time from home!”

We posted the photo of the Officer in the kiddies ride. We were performing high visibility foot patrols in the city centre, engaging with the public and making sure local businesses did not become victim to thefts – he jumped into he ride for the craic and the photo was used to promote rural crime and what we do about it as well.” “The article failed to mention what else the page does, for example – the chap who ate several packets of tables in a shop in Monaghan Street one night and walked out – a CCTV image was posted and within 2 hours the crews were at his door rendering medical assistance – without that post on this page that man may well have died.

“As recently as last week a missing teenager was located through Twitter when one of his friends he was with tweeted us and told us where they were.
A crucial witness was identified and located in relation to a fatal collision who may never have been identified without the page.

“It does actually help us to solve crime and detect offences with information being PM’d to us on a regular basis, from folk who would never lift the phone or call into a station.

“It’s pretty awesome, mind you, that we are 2nd in terms of the number of words we posted in December and that someone actually worked this out for us, who would have thought it!”

And the public are supporting the PSNI, testament to the community relations the force’s social media has helped build.

One woman, on Facebook, said: “Strange that this article doesn’t mention the witnesses that have come forward, the missing people found, lost property returned to owners, warnings about possible crimes being committed in certain areas (distraction burglaries), amongst other things, all due to the posts on Facebook. It is a way for the PSNI to reach thousands of people that they wouldn’t normally be able to. I would say that is a very efficient use of 8 hours a week, most of which is in their own time, not when on duty. The odd more light hearted post helps to keep the public interested.”

Another woman posted: “10 years ago young people were afraid to go near the police, now you have a personality online showing the public your approachable and willing to help. Keep up the good work folks, I for one look forward to the witty Sunday morning posts!”